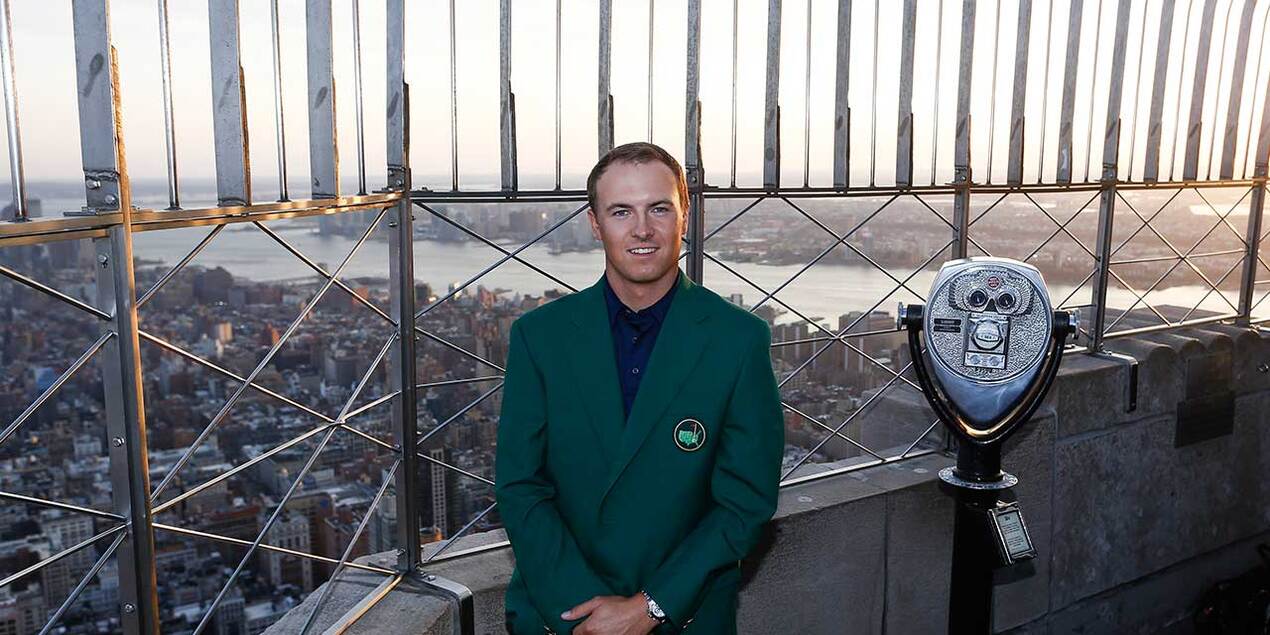 I’d just walked out of the Time-Life Building in midtown Manhattan with Jordan Spieth when there was a tap on my shoulder. A short-ish nattily attired man with slick dark hair who could double as an extra on the set of Mad Men quietly asked if the Masters champion would like to meet Bill Clinton.

Only in New York. That's what happens when you're walking alongside the 21-year-old who won the Masters in record-tying fashion, and one of the bright young stars expected to help carry golf well into the next decade.

Clinton, a golf-nut, heard Spieth was in the neighborhood in the midst of a media tour and someone from his staff had spotted the Green Jacket. The former President wanted to see him.

“You’re doing amazing things with your foundation,” Spieth told the 42nd President. The two chatted for 10 minutes, everyone posed for pictures and Spieth was off to his next stop.

Clinton wasn’t the only one who congratulated the newly minted major winner.

Messages poured in from Matthew McConaughey, Mike Trout, Troy Aikman, Emmitt Smith, Kevin Durant and Dirk Nowitzki, among others. Greg Norman wanted the phone numbers and emails of Spieth and his parents.

When Spieth stopped by Bloomberg’s headquarters on Lexington Avenue for an interview, the guy whose name is on the building wanted to say hello. Spieth told him that at the Masters putting is “all about speed ... which we seem to be having some trouble with this morning,” as Mike Bloomberg left his first few rolls on a putting mat short.

Everyone else in the office came to a standstill -- especially the women, young and old, who lined the set taking pictures with their iPhones, gazing and smiling at the blonde-haired, blue-eyed kid who if he had stayed all four years at the University of Texas would be in his senior year. It was the kind of showstopper moment usually reserved for celebrities like George Clooney, one insider said.

After a female reporter from Access Hollywood interviewed him, she thanked him and told him he was adorable. When the elevator door unexpectedly opened on his way to another stop, a 20-something girl on the other side did a double-take, excitedly turned to her friend and exclaimed, “Look!” before adding, “Hi!” and a wave. Spieth just smiled.

Hello, world. Everyone from David Letterman, to TMZ, to Clinton, to news and financial networks, to Sports Illustrated to People Magazine wanted a piece of golf’s new wunderkind. Spieth did 24 interviews in 24 hours. He doesn’t drink coffee -- “I’ve had it maybe twice in my life,” he said -- but needed it now. Not that you’d know it by looking at him.

Spieth resonates. Winning and doing it in the manner in which he does -- a holed bunker shot to get into a playoff that he would win for his first career victory two years ago, clutch up-and-downs in another overtime win outside Tampa a few weeks ago and tying Tiger Woods’ record for the lowest four-day total in Masters history -- helps. But it’s the easy way in which he carries himself outside the ropes that draws everyone in.

Last year, a few players gave him the nickname Golden Child. Spieth hates it because it goes against how he was raised in Dallas by his dad Shawn, the CEO of MVPIndex, a company which analyzes athletes and social media, and mom Chris. His younger brother Steven, a 6-foot-6 sophomore shooting guard for Brown University who Spieth refuses to play in basketball because he can’t beat him, and 14-year-old sister Ellie, who has neurological issues, help keep him grounded. “She is my inspiration,” Spieth says of Ellie. “She imparts humility on all of us.”

When he emerged from his hotel Tuesday morning, Spieth was carrying his own luggage. On the way into the SiriusXM studios Tuesday, he was the one holding the door for everyone else in the procession. He never once said no to a photo or an autograph request.

Golden indeed, and while his manners might reflect someone with an old head on young shoulders, there’s still a boyish curiosity about him. When Letterman pointed out that Spieth was the second-youngest player to win the Masters, Spieth grinned sheepishly. As he stood at the top of the Empire State Building on Monday night, he was wide-eyed at the tower above and the city below. Stuck in mid-day traffic, he looked out the window at a food cart. “Diet Snapple,” he said as if he’d never seen it before.

If there was still any doubt that he really is just 21, the goofball side of him confirms it. Walking through a revolving door, he stops just as he gets outside so his agent behind him is momentarily stuck. Other times he takes playful swipes and throws verbal jabs at those around him. When sitting down on camera, he often doesn’t know what to do with his hands.

Spieth also isn’t sure whether to leave the Green Jacket – Augusta National gives him one of a current member who is of a similar build until his own is ready -- open or closed whenever he sits down on camera.

And America will take him.