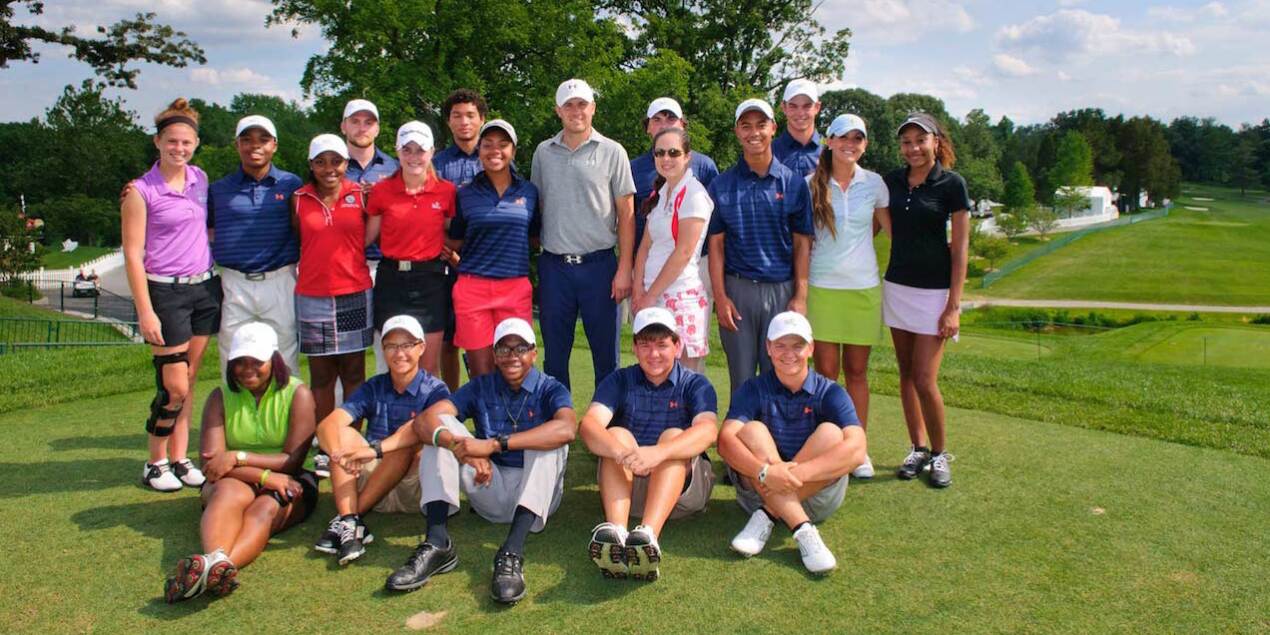 Kasey Torres, a 15-year old from Los Angeles with a 1.7 handicap, who regularly shoots in the mid-70s; Sam Wimbrow, an 18-year old from North Carolina and one of the top First Tee golfers in the United States, who earlier this year shot a 68; Matthew Gang, a 13-year old Special Olympics athlete from Virginia, who started golfing at age 6; and Sergeant Leroy Petry, a Medal of Honor recipient from Fort Lewis, Washington, who lost an arm saving the lives of two fellow Army Rangers during battle in Afghanistan.
On Monday, June 23, 2014, these golfers will tee off in a foursome with Jordan Spieth, the 9th ranked golfer in the world and a PGA champion, at the 3rd Annual Congressional Pro-Am, sponsored by Perfect Sense Digital, LLC. Since 2012, Perfect Sense has been bringing together individuals from a wide array of backgrounds to provide a memorable and unique experience at one of the most historic courses in the nation. For the second straight year, Spieth will headline an outstanding field of professionals, who will join other youth golfers from The First Tee, Special Olympians, and wounded service members from all over the country.
Related: View the photo gallery from the day of the event

Three years ago, at the 2011 Chevron World Challenge, David Gang, Co-Founder and CEO, of Perfect Sense Digital, watched with great pride as his son, Matthew, who has Down syndrome, walked 18 holes with Tiger Woods – the first time a Special Olympian had ever walked a course with the top-ranked player in the world. Inspired by this moment and what it meant to his son, as well as the mission of Special Olympics Unified Sports®, Gang sought an opportunity to pair more Special Olympics athletes with PGA professionals.
Gang united with the Tiger Woods Foundation to find a home for his tournament. In 2012, with the then-AT&T National at Congressional Country Club, just thirty minutes from Perfect Sense Digital’s headquarters in Reston, Virginia, he saw the opportunity. With two foursomes in the tournament pro-am, Gang invited four of the top Special Olympics golfers from around the country – Tyler Lagasse (Massachusetts), Tyler Whitehurst (Florida), Scott Rohrer (South Carolina), and Joel Murray (Louisiana) – to participate. Joined by a Perfect Sense Digital client, Derrick Kraemer, PGA TOUR professionals, Gary Woodland and Brendan Steele, the event epitomized the ideals of opportunity and inclusion that Gang sought to promote as part of the mission of Perfect Sense Digital.