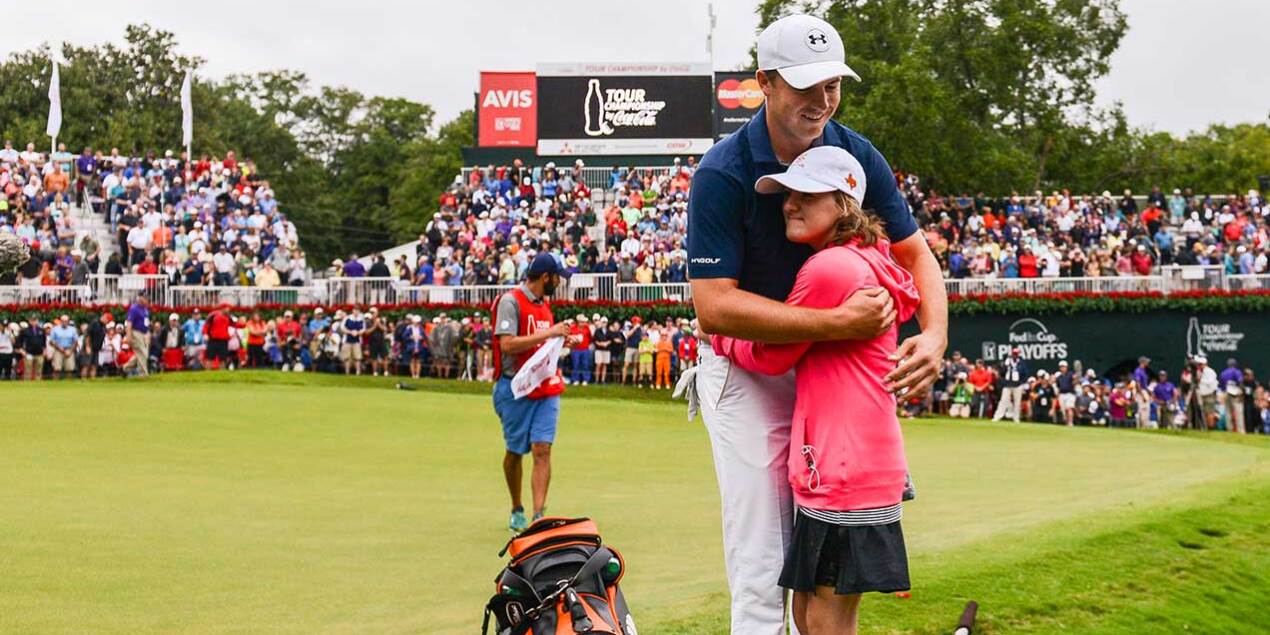 Jordan’s strong competitive edge has always been tempered with a soft heart. Growing up in Dallas, Jordan began playing at a high level at an early age. However when his younger sister Ellie was born with a neurological disorder, the family focus quickly shifted from his talents to her needs. Jordan’s family life is the reason he has remained grounded on the world’s biggest stage, and he attributes his charitable perspective to her role in his life. “I love spending time with her. It's humbling to see the struggles she goes through each day that we take for granted. Because of Ellie, it has always been a priority to me to be in tune to the needs of others.” Jordan always believed he could make a significant impact, starting in his high school days. With a school mantra of “a man for others”, he spent afternoons volunteering at Ellie’s school and seeing first hand the great value of volunteerism.

At the age of 19, with no status and before making Tour history, Jordan quickly recognized the opportunity that the stage provided and he dreamed of building a philanthropic legacy as large as an athletic one. In 2013, Jordan achieved his dream of winning a PGA Tour event, followed by an invitation to the US Presidents Cup team and being named Rookie of the Year. His most notable accomplishment, however, was establishing the official Jordan Spieth Charitable Platform. As he had always hoped, success on the course immediately yielded the opportunity to serve others. Junior golf had propelled his career and afforded him the chance, so a focus on growing the game with youth was key. The Tour’s support of military veterans was inspiring, and thus a second charitable focus was chosen. His interest in pediatric cancer was inspired by the cancer battles of some of his childhood friends. But Jordan's story always comes back to Ellie, his devoted sister and fan who means the world him and shaped this charitable vision. Jordan concentrated his final focus on funding and assisting opportunities for special people like Ellie all over the country.

These significant areas, special needs youth, junior golf, military support and pediatric cancer became the pillars on which he is building his most important legacy, with hopes to one day be the most charitable athlete foundation. The inaugural Spieth Shootout event in fall 2014 celebrated the success of Jordan finally realizing his dreams, not solely achieving trophies but of giving back in the biggest ways possible. Thus, his vision officially became the Jordan Spieth Family Foundation.

Individuals with Special Needs
The Foundation seeks to partner with programs that close the gap for those with cognitive or neurological special needs, ensuring these children and young adults have access to developmental programming and vocational opportunities to expand their communication, self-help, and social skills. We focus on pursuing partners that create developmental opportunities and promote inclusion for the intellectually disabled.

Junior Golf
We believe the game of golf can be a conduit for many life skills and an on-ramp for expanding youth horizons. The Foundation will focus on junior golf programs that are diverse, emphasize outreach and remove potential socio-economic barriers to the game. We also pursue partnerships with groups that utilize golf as an avenue to furthering education and/or mentorship opportunities.

Military Families and Veterans
In an effort to honor those military members who have served our country, the Foundation pursues established grant partners who directly impact service members and/or their families through financial aid opportunities, familial respite support, mental and physical therapies and avenues that look to provide long-term support mechanisms.

Pediatric Cancer
Our goal is to fund programs that offer direct care for children fighting cancer and their families. This includes supporting child life services, emotional and social therapies, familial respite, and avenues to overcome financial burdens on families when facing a diagnosis. Additionally, the ultimate goal of the JSFF and our partners would be to eradicate pediatric cancers, and we welcome grant applications for research and clinical trials.