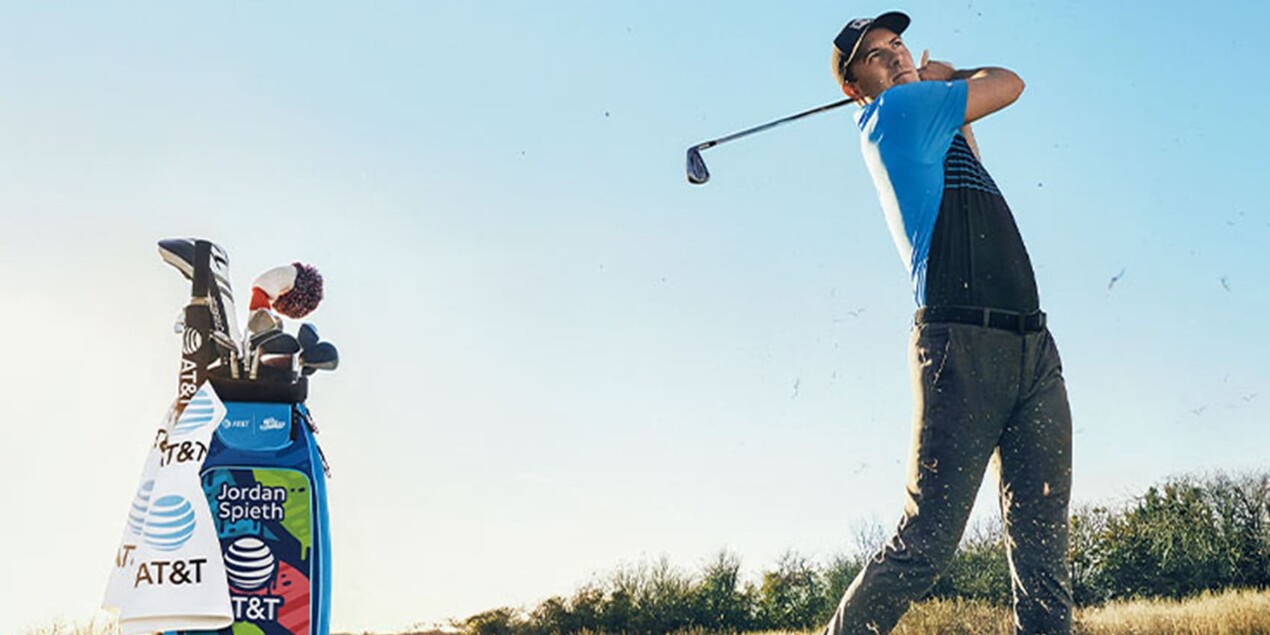 Matt Corrado’s colorful graphic art hangs in galleries. He’s also painted everything from a wooden chair he found by the side of the road that now sits in his office to automobiles and motorcycles and basketballs. Right now, he’s even painting big metal Greek statue.

The lifelong Washington Capitals fan also worked with his hometown team on a mural prior to the 2019 Stanley Cup Playoffs. And he live-painted a moveable wall for the Baltimore Ravens that lives at M & T Bank Stadium and has become a popular selfie spot.

“It’s something that I particularly enjoy, that crossover of sports and art,” Corrado says.

His artwork has never appeared on a golf bag, though. That is, until this week at the AT&T Pebble Beach Pro-Am.

About three months ago, the Washington, D.C.-based artist was asked to design the bag that Jordan Spieth’s caddie, Michael Greller, will carry in the tournament. It’s the kickoff to a promotion with AT&T, the three-time major champion’s long-time sponsor.

AT&T owns the branding rights to Spieth’s bag. In the past, it’s been used to spotlight HBO Max and the “Wonder Woman” movie. This week, though, the bag Corrado created launches a contest where fans compete to design the one Spieth will carry at the AT&T Byron Nelson in May.

Fans can create and submit their designs on a web-based app starting Thursday. The five finalists will be selected and flown to Fort Worth, Texas where the winning bag will be unveiled.

“If you’re entering the contest, I’d say take Matt’s lead and really have some fun with it,” Spieth says. “There are so many chances to get creative with a blank golf bag and create something that is going to stand out.”

Corrado’s certainly does. The colors are bright – predominantly blues, reds and greens – and the pop art style on each panel of the bag is distinctive. As expected golf clubs, balls and a green figure into the design but there is much more. 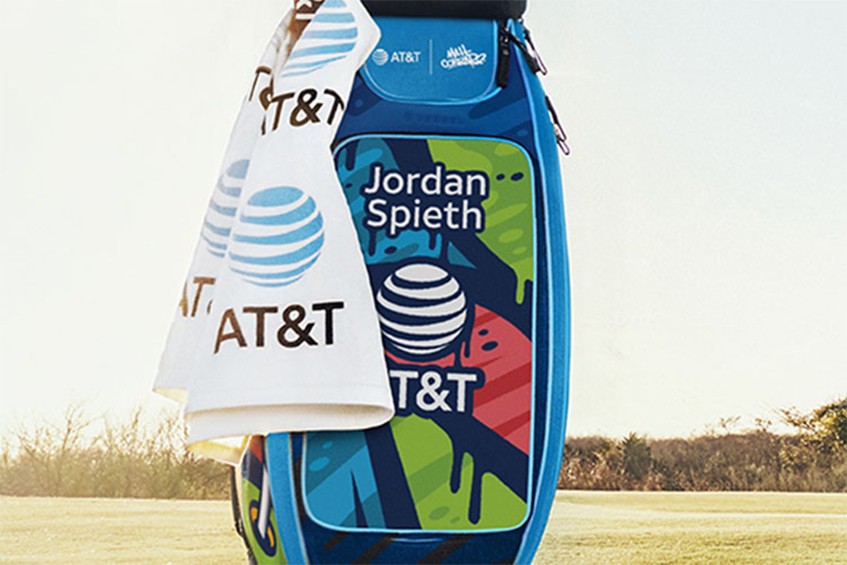 “One of the things that was challenging, but cool was they wanted it to be specific to Pebble Beach, which was fun,” Corrado says.

The artist has played golf most of his life, but he has never been to the Monterrey Peninsula. His parents had taken a trip to Pebble Beach about five years ago, though, so he picked his mom’s brain and made sure landmarks like the Lone Cypress were included in his creation.

“And just the natural beauty -- looking at the pictures and everything – I kind of was inspired to use some of the colors and the waves and the water and kind of that California feel,” he says. “I think that was probably the most challenging part was just making sure we got the elements in and to make sure that it tells the story and is specific to Pebble Beach.”

Corrado also researched Spieth, who turned pro midway through his sophomore year at Texas and won the John Deere Classic two weeks before his 20th birthday. He won his first two majors two years later and added a third in 2017.

And in an interesting coincidence, Corrado found that one of the signature features in his art could be used to tell Spieth’s story, as well.

“There’s an element that I use a lot in my artwork -- I use these hands,” he says. “They're kind of like these classic cartoon hands. And I use the hands doing like kind of a rock-on kind of hands, and it looks like horns or something.

“And Jordan, he went to the University of Texas, the Hook-'em-Horns hands, which is the same thing. So, I put that element in there, because I thought, well, this is cool because I already do this in my artwork. And it also is kind of a nod to his time at Texas.”

The detail was not lost on the 11-time PGA TOUR champion who tied for fourth last week at the Waste Management Phoenix Open.

“Matt’s design is awesome,” Spieth said. “I really love the bold style and am excited it’s going to stand out on the course. It feels personal, too, with the Hook ‘em Horns and the iconic Pebble Beach lone Cyprus tree.”

Corrado always knew he wanted to be an artist, and he studied at the Rhode Island School of Design, graduating in 2005 with a BFA in illustration. He’s developed a distinctive pop art style that is driven by the things that influenced him as a kid – skateboarding and comic books and graffiti, among them.

“Those are kind of like some of the core elements that I feel like inspired my art as I was growing up and as I was kind of developing a style,” Corrado says. “But I also really enjoy graphic design and clean, bold design stuff.

“So, I try to kind of pull some of those things in consciously and subconsciously, I think to kind of create a style and a visual language that can be traced back to me, too. Part of it is just a branding thing where you want your work to be recognizable and consistent in some capacity. So, it's kind of a combination of those things.”

Corrado said the opportunity to design Spieth’s bag came out of the blue, a cold-call of an email, essentially. And he was immediately excited to participate in the project.

“I've done a lot of murals and I've done a lot of canvases and paintings and stuff like that,” he says. “But there's something really cool that I always enjoy about actually putting artwork on like tangible products, things that people use and functional. ...

“And it's also a challenge to try to like figure out how to apply artwork to something like a golf bag. It's just not it's not something you see a lot, you know? So yeah, I thought it was really cool and kind of would be an exciting challenge and a good opportunity.”

The payoff comes this week when Corrado will see the bag on national television at the AT&T Pebble Beach Pro-Am, a tournament Spieth won in 2017.

“I hope I get to see the bag out there and I hope Jordan does well,” he says. “He usually competes pretty well in that tournament. I have some friends and stuff who will be watching too -- they'll be watching anyways, but it will be fun to have them maybe see my bag pop up, too, if it gets shown on the coverage. I'll definitely be watching to check it out.”

And one of Spieth’s fans will have a similar experience May 13-16 at the AT&T Byron Nelson.

Note: Fans can create and submit their designs on a web-based app starting Thursday. The five finalists will be selected and flown to Dallas, Texas, where the winning bag will be unveiled. For more information, click here.