The Jordan Spieth Family Foundation was thrilled to host four Dallas-area high school seniors at the AT&T Byron Nelson Championship on Tuesday, May 7th at Trinity Forest Golf Course. The students, Jordy, Mayre, Ebelin and Daniel, participated in the Northern Texas PGA Foundation's Fairway to Success program through their partnership with three Dallas ISD high schools. The program, founded in partnership with Deloitte, focuses on after-school golf skills in addition to mentorship, office visits, college scholarships and life skills. Deloitte and the University of North Texas gifted their scholarships on Monday at a breakfast, while Jordan and the Spieth family opted to surprise their remarkable recipients on-site with lunch, meet and greets and a VIP tour of the tournament behind-the-scenes including: lunch in the PGA TOUR Player private dining rooms, tours of the ShotLink trailers, equipment area, Media center and a final private shopping spree stop at the merchandise tent.

These students have shown outstanding commitment to their academics and work-loads, incredible leadership as well as perseverance in the face of adversity. The Jordan Spieth Family Foundation is thrilled to surprise these deserving young people with a JSFF scholarship while on site at the AT&T Byron Nelson to assist with their college plans. Jordan, Annie and Chris Spieth along with Foundation and PGA TOUR reps were on hand to surprise and spend time with these scholars.

Jordy is very proud to serve as a role model for his 11-year-old sister. After his family immigrated to the United States, he was able to help teach his sister the English language. Jordy's dream is to become a lawyer, so he is able to help immigrants like himself understand the laws better in the United States. Jordy will also be attending the University of North Texas at Dallas this fall and will be majoring in Political Science. Jordy has been a part of JROTC all four years of college and currently serves as a Company Commander. He also is the team captain of the swim team, secretary of the Spanish Honor Society at Thomas Jefferson, and is the team captain of the academic team for JROTC. Jordy is also able to maintain a part-time job after school at the Original Chicken & Rice. 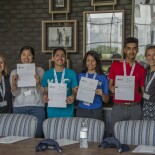 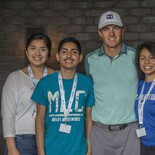 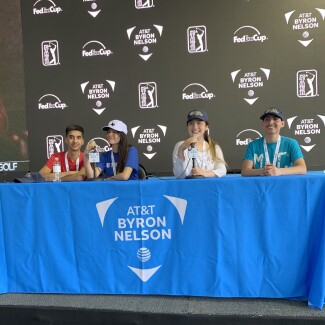 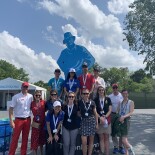 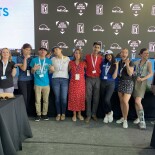 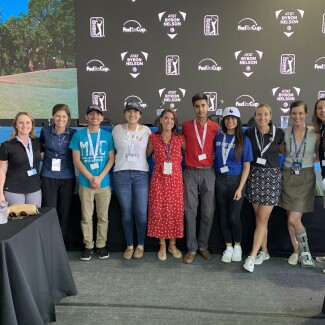 Mayre said in her interview "making money isn't as significant as being happy" and that holds true to Mayre's personality. Mayre wants to make a chance within everyone as she continues down the path of life. She is planning on attending the Texas A&M-Commerce this fall to study music. She was accepted into the music program at Texas A&M - Commerce. Her goal is to become either a music or English teacher. Mayre has recently started working part-time after school at McDonald's. She is very involved with the Thomas Jefferson band as she serves at the Drum Major, Section Leader/Drill Instructor and the band council VP. She also is currently serving as student council president and has served for two straight years, she had previously been treasurer. Mayre is also currently the VP of the National Honor Society.

Ebelin will be the first in her family to attend college and to pursue a higher education degree. She will be attending Texas A&M this fall and plans on studying nursing. Ebelin has participated on the Thomas Jefferson golf team that last 3 years and won districts last season. Ebelin is also involved with the TJ drill team and National Honor Society. She serves as the President of ASP Ambassadors. Ebelin currently works at In-N-Out Burger after school and during the summer. She is choosing to become a nurse, as she wants to make a difference in people's lives.

Daniel is a senior from W.W. Samuell High School and just graduated with his associate's degree from Eastfield College this past Saturday. Daniel is planning on attending Texas A&M majoring in biochemistry, with the pursuit of going to Medical School and eventually becoming a general surgeon. This past summer, Daniel interned at UT Southwestern and was able to shadow doctors. While he is maintaining his collegiate and high school classes, he also works part time after school at Pizza Patron. Daniel is also involved with a program called Upward Bound, which Daniel is able to help lower-income families and tutor students.