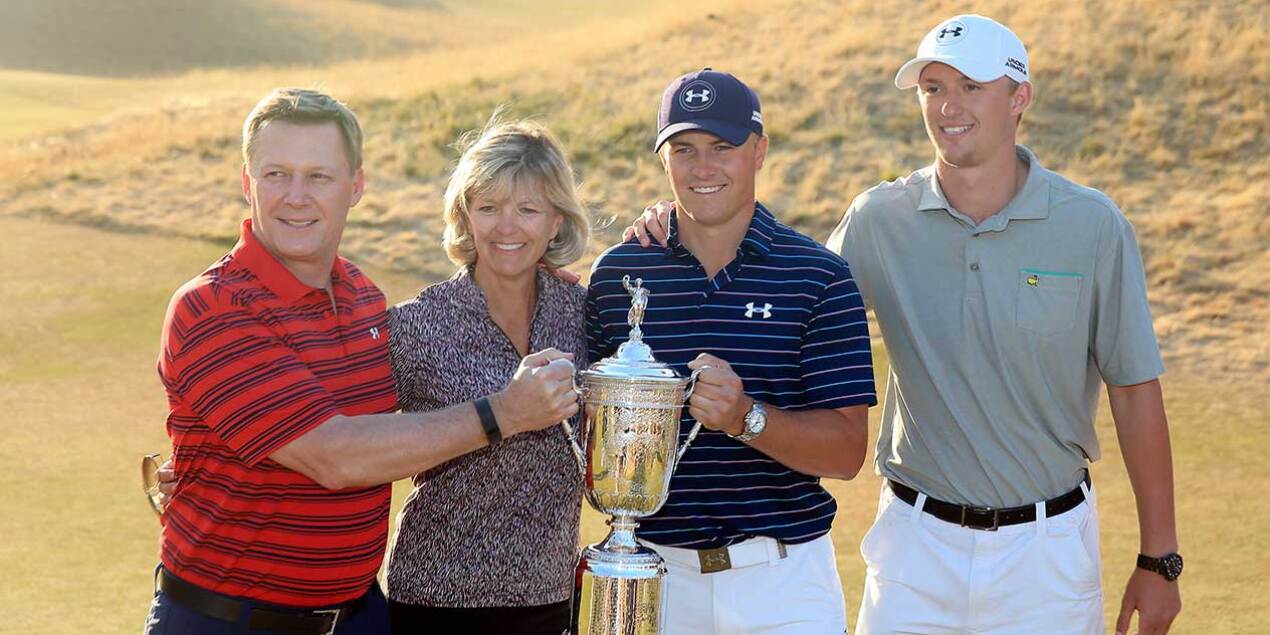 The Spieth family congregated around an E-Z-Go flatbed cart as Jordan signed his scorecard Sunday evening. His brother Steven leaned against the cart’s side, while his mother Chris sat in the front seat. The family’s patriarch Shawn paced in small circles.

They couldn’t see Dustin Johnson as he attempted to overtake Jordan. The Spieths were a couple hundred yards from the green. Their view was obstructed by one of Chambers Bay’s large fescue mounds and the record-setting grandstand that surrounded the final green. They weren’t unaware of what was happening, though.

Steven and Shawn listened to the radio broadcast on headphones clipped to their left ear. Chris waited in silence, the crowd’s communal reactions providing her updates. Shawn’s left hand was pressed against his ear piece as he tried to hear each word clearly. His right palm pressed against his head, a sign of the anxiety of the moment.

The final minutes at Chambers Bay were stressful for the Spieths. This wasn’t like Augusta National, where Jordan was in control for all four rounds. Johnson had a 12-foot putt to beat Jordan and a 3-footer to tie him; he missed both.

“(The results) are about the same now, but nothing else was the same,” Shawn said. “It’s just the ultimate test of patience. He didn’t have to be as patient (at Augusta) because he was in command of everything. Here he had ups and downs.”

The closing holes at Chambers Bay were but a microcosm. Jordan’s 27-foot birdie putt on 16, which gave him a three-shot lead, elicited emotions he hadn’t expressed since a teenaged tantrum, he said. An awful 6-iron and a missed 4-footer led to double bogey at the next hole. He hit 3-wood to 15 feet for a two-putt birdie at 18. That was the difference.

Spieth watched the tournament’s final moments in the scoring trailer with his caddie Michael Greller.  After he emerged victorious, he and his family walked down a dusty trail toward the 18th green. Metal barricades lined each side of their path, rows of applauding fans behind them. The crowd at 18 let up another loud cheer when he emerged on the green, almost identical to the one they gave when he left minutes earlier.

They were celebrating a young champion’s hard-fought victory, one that put him halfway to the Grand Slam and added another line to a resume already brimming with impressive achievements.

Jordan joined select company with his U.S. Open win. He’s the sixth man to win the Masters and the U.S. Open in the same year. He’s the youngest U.S. Open champion since Bobby Jones, and the youngest player to win two majors since Gene Sarazen. The 21-year-old is doing things that haven’t been accomplished since the 1920s.

There was another club that he became a member of this week. The criteria for entry are more subjective. He won a major when he wasn’t at his peak. There aren’t many who can do it.

Everything was working when he won two months ago at Augusta National. He led after each round, and never by fewer than three shots. He shared the lead after both the second and third rounds, entering Sunday in a four-way tie for first.

Grit allowed him to emerge from the pack. On a week when complaints about the greens were commonplace, Jordan said short putts were crucial to victory. He holed important putts within 10 feet in the first round, turning an over-par score into a 68. He said the first and last rounds are the tournament’s most important. The confidence he drew from his good start was crucial, he said.

He didn’t allow himself to join the chorus of those complaining about Chambers Bay.

“There’s noise around every golf tournament, about a pin position here, or the greens are this, or the layout. Someone has to win it,” he said. “The quicker you realize that and don’t worry about it, the easier it is just to move on with your game.”

And then there was Greller, the local boy who was a school teacher and Chambers Bay caddie before becoming Spieth’s full-time looper.

“That was probably the best work that Michael’s ever done, to get me through,” Jordan said. “At Augusta, I was on and I was making everything and I was striking the ball fantastic. And he was the one who got me through this week, when I wanted to get down and things weren’t going well.”

Greller’s final piece of advice before shots was “paint the picture,” a phrase intended to get Jordan focused on his shot, not his swing. Jordan said he can start thinking about his mechanics when his ball-striking isn’t its best.

“Shooting 5 under is about as good as I could have done on this golf course,” he said.

And it was good enough.