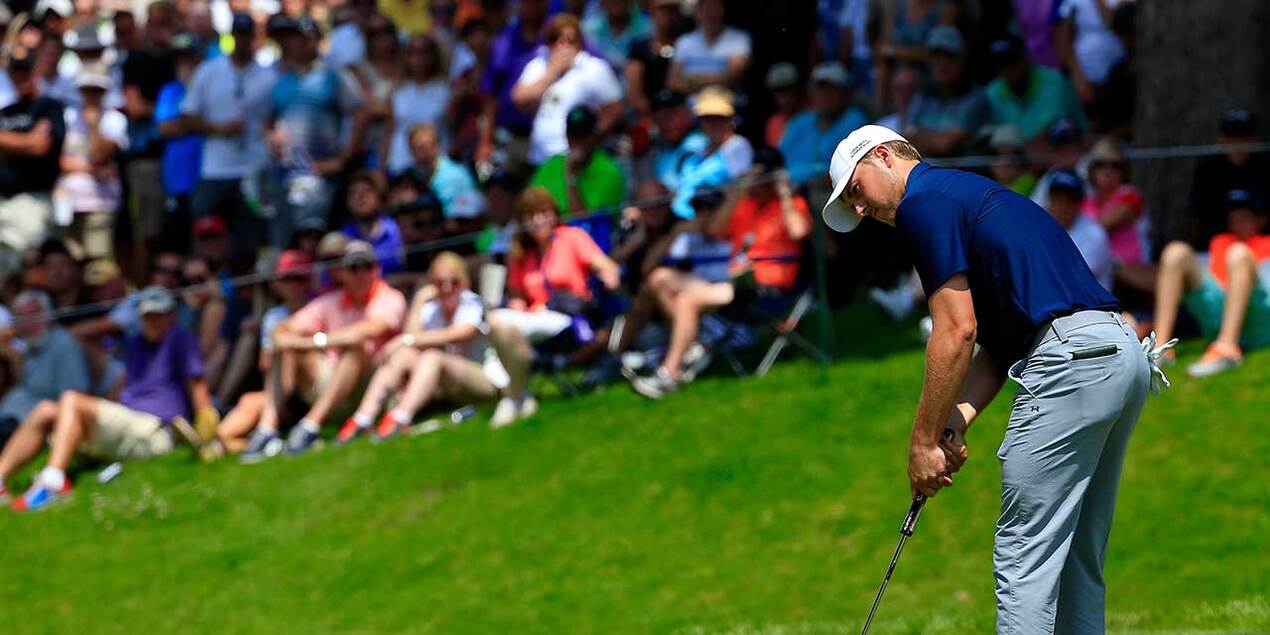 Q. I've seen you putt a lot in the recent months, and this was probably the best putting round I've seen you have since the Masters.
Possibly. I've been working really hard on it. We had really pure greens today. I let a couple slide by the hole early and then just told myself, I am not going to miss any more putts low. Just try and hit the high lines on every single one. Certainly started to payoff there. Obviously would've liked to snag one of the last couple, but solid round when I needed to play well just to avoid going home.

Q. Looked like you were frustrated with the wedge into 13, and then from there on in you had your distances and your putter dialed in.
Yeah, when the greens are this soft I'm hesitant to fly the ball to the hole because it's going to spin. But ultimately it's going to spin down below the hole to a fall line spot, so I am just trying to be a little too perfect on this course. That's what's bit me in the past when I haven't played like last year. So I'm just trying to find good, full shots I can throw past the hole and bring it on back.

Q. What a difference a day makes. Go from outside the cut line to a 7-under, 64; what changed?
Just another round of golf. This was the third round I've played since the US Open. With the pro-am Wednesday being the first full round and then yesterday, it's just repetitions. I'm getting on-course reps and it's making a difference. I'm working on some things coming off a little break there, and my putter certainly -- I was a little more aggressive with it today and it paid off.

Q. You were even through 22 holes in this tournament. Finally got a birdie putt to drop on the 5th, and then seemed like the floodgates opened after that. How did you get the momentum going?
Well, it helped that I had one pretty close. I had like a two-footer to get going. Then the putt on 16 was really big. I knew I had a lot of birdie holes left. Kind of needed to steal one that I maybe didn't think I would get. Obviously from there that stretch of 18, 1, 2, went perfectly. Then the cut line was out of my head and it was, How can we move up the board a little more?

Q. A little cherry on top on the second. Different set of circumstances, but your first start after winning the Masters in Hilton Head, you had a slow first round then bounced back with that great Friday. Were you able to draw on past experience?
I think I was drawing a little more on my past years here where I haven't managed to shoot under 70 in the first round on this course, and that's well above average. So I was kind of looking back and saying, Well I've shot even or 1-under before and finished 19 in this event. We can do it again. Today was a solid round to get myself in a position to make a run at it.

Q. The shot that you made on 17, the hybrid iron...
Yeah, that was nice. I don't know if it turned it around as much. I was still searching for answers with my driver. My driver is not treating me well this week. It's tough, because the only time I am hitting it is on the longer holes, and when you're not hitting the ball solid and/or in the fairway, makes these holes, the more difficult of the holes out here, even harder. I just, yeah, think that shot was important, but I don't know if that turned around. I think really the putt I hit on 18 was as important as any. Just getting a good feel, seeing one go in mid-range, and then I brought it to one and two.

Q. I noticed on 18, too, you saw the ball lying down fairway?
Yeah, I've had multiple mud balls, and I've actually had quite a few balls go into divots in the fair way. Just tough breaks here and there. I walked up and it was in a divot pointed at the middle of the water. Ideally you don't really want to swing with that divot, so I just had to try and stab it into it. It was somewhat of a tough break, but I think it got a pretty good bounce. Ultimately didn't make a difference.

Q. The cut line, when does that leave your head?
Yeah, I knew I needed to shoot at least 67, 4-under today. It doesn't matter if it's a course that yields a lot of birdies, it's still hard to do on the PGA TOUR. I wasn't taking it for granted. I was still searching yesterday. Went to the range in the evening. Couldn't find any answers. Couldn't find any answers this morning. I was texting with my coach, and then just went out there with a positive frame of mind. Then once I got a couple shorter putts to go in and I had a little bit of breathing room, I was able to be a little more patient knowing that there were other birdie holes left.

Q. Seven-hole stretch between 5 and 11. You start off with four pars and things really turn around. Talk about that.
Yeah, sand wedge into 14 and it landed on the back edge of the green. If it goes a yard right, a yard further, you know, it's completely different scenario. To get a birdie there and hit the fairway on 15 was big. Then on 15 my ball is in a divot with mud on the right side of the ball. Just shoots it low and left. I missed the green. You try and gain momentum, and just seemed like every time I had a little bit of momentum it went away. But it bounced back from those scenarios nicely. With the up and down on 15 and then 17 being able to mistake par, I knew I would have chances, and then my putter just started working. Whether it was the middle of the round, the beginning, or the end of the round, I don't think it makes a difference on the holes out here. Plenty of birdie chances. It's just when that hole starts to get bigger with the putter.

Q. We were the media room, and all of a sudden I see Jordan Spieth walking in there. What happened there?
I just had to use the restroom.

Q. When you have to grind here when you maybe didn't expect to, does that give better preparation for St. Andrews?
Yeah, I think so. I think today was a big day. I made a huge step forward today based on how i felt yesterday when I was going to bed. I wasn't feeling good about my game based on Wednesday and yesterday, and to come out and shoot a round like this today when I didn't feel like I tee to green was very strong. Just made it work and took advantage of a couple holes. The eagle obviously shoots up that score pretty good with two really solid shots there. Ultimately this was a big day for me in my preparation for next week.

Q. Having started this week with a level par, things have really came to life for you today. Great round of 64. Tell us what went so right for you today. When we look at some of the action, it seems like a few putts drifted by yesterday; whereas they were going in for you today.
Yeah, that was the difference. I was putting a lot better today. Didn't strike it particularly well at the end. Couple good spots where I hit some solid irons, but the putter was the difference there.

Q. Played the back nine first today. That was on 16, and nice effort for you there as a well. Nice to see those sort of ones go in. And 18 as well.
Yeah, 18 was a little breaker from right to left. Just had to cast it out there. About three feet to go, just wanted it to hold up, and snuck right in the left side. A little fist pump to know that I was 3-under through the front nine knowing the cut was going to be 4-under. I had a lot of birdie holes left.

Q. And really grabbing the initiative as well then. Much as the putter was working, the approach play was getting better and better.
It was getting better. This was a nice one into No. 1, and then I got it right below the hole where it was a pretty simple putt from that range. I was able to knock it right in.

Q. And I guess the high point is this 241-yard approach into No.2 to set you up for eagle, is it?
Yeah, I've got this driving iron I'm using in preparation for the Open at St. Andrews. I would typically use a hybrid on this course, but I want to get some swings with this club. I had a great number there just to launch it up the right side of the green. Obviously lucky just to coast the perfect distance, but nice to capitalize with a three.

Q. You said playing here this week you want to play well and find the right feel before heading to St. Andrews. Are you getting that?
Today was a big step forward. I was not feeling great after Wednesday, and then after yesterday being behind the 8 ball. But to come today and shoot a solid round when I know I needed to and to have my putter working when I knew I needed it to gives me a lot of confidence. I putted about as well today as I have the past couple months. I need to continue to work on it and some speed control next week, but it was a solid day.

Q. Obviously a well as this week is now going and as much as you hope to do well, maybe claim another title here, one of those trophies. There is so much talk about the Grand Slam. How much is all this stuff in mind and thoughts drifting towards next week?
I'm excited to go next week just because I love St. Andrews and I love the town. I've had a great time the couple nights I've spent there. You know, it's going to be an exciting atmosphere, and it may be good for me to have a limited amount of time there just to get some feels. Feel like I got a good amount of practice in and I'll be able to adjust to the speed and the conditions there. I feel like I'll be able to do that in a couple days. Sure, yeah, it's on my mind. It's on my mind. But I'm really solely focused on how can I get the third one right now, because it is a career goal of mine to have a career Grand Slam. If it happens in one year, that would be pretty special. I'm just focused on St. Andrews.