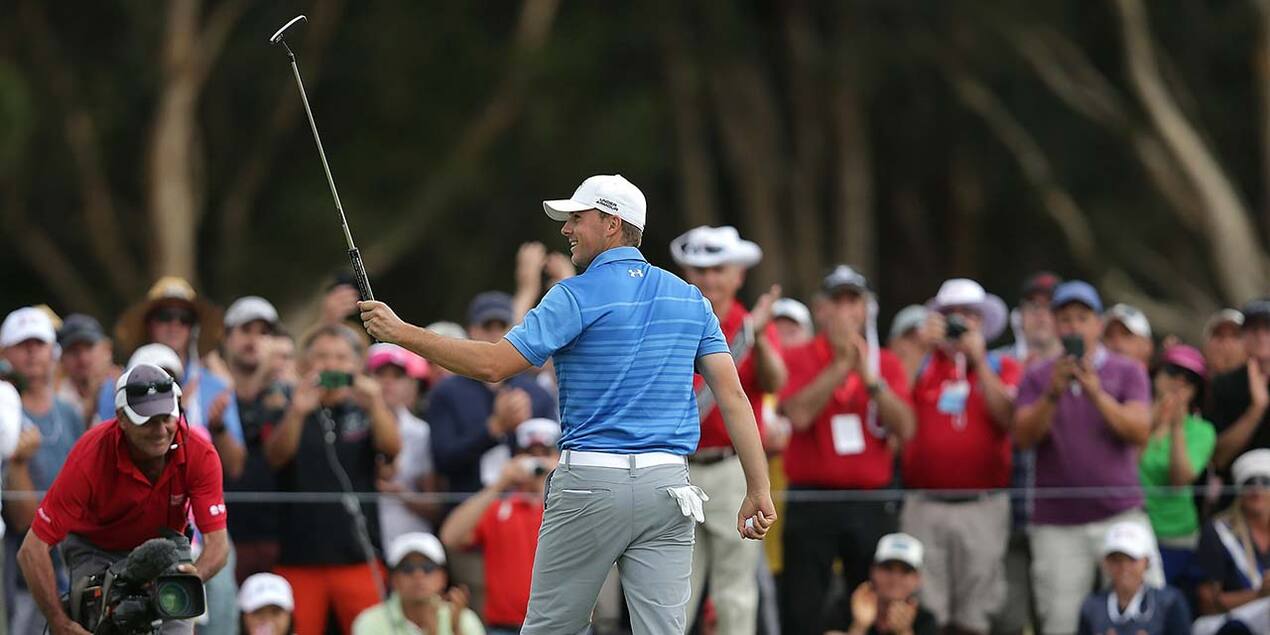 Jordan Spieth wowed his Australian audience with a command performance in Sydney today, and immediately promised to return and defend his Emirates Australian Open title in 2015.

Spieth, the 21-year-old Texan who is already close the top 10 players in the world, smashed the course record at The Australian with a closing 63 today, finishing a full six shots ahead of his closest-pursuer, Queenslander Rod Pampling, and also leaving world No. 1 Rory McIlroy and No. 3 Adam Scott in his wake.

His amazing round in tough, windy conditions was immediately hailed as one of the greatest in the long history of Australian tournament golf; Spieth himself said it was the best round he had ever played.

"Yes, I'm certainly coming back to Australia,'' he said, clasping the Stonehaven Cup with its roll call of legendary names including Nicklaus, Player, Palmer, Watson, Thomson and Norman. "I've freakin' had an unbelievable time this week, on the course, off the course. We stayed at the Darling (Harbour) at the Star (casino hotel), just an incredible environment there, I got to go to the Opera House bar and hang out there and Michael (caddie Michael Greller) actually took his wife to the Nutcracker last night and he said it was an unbelievable experience. We made the most of our trip given the afternoons were spent playing golf. I'll certainly be back.''

He will find himself welcomed with open arms. Spieth was a genial and articulate visitor all week, regardless of how well he played, which as it happened, was crazy good. He started out in a tie for the lead and made four birdies in the first seven holes including three on the trot from the fifth to the seventh. By the time he reached the 12th tee box he saw a leaderboard and knew that he had the lead by a few shots.

McIlroy could not make ground; nor could Scott. Spieth looked like he was playing a different golf course.

And here was the remarkable thing. He and Greller devised a more conservative strategy to protect the lead, but Spieth kept rolling birdie putts in. "I just wanted to keep my head down and focus on my putts. At 11, there's one as you walk to 12 tee box, so at that point I'd had four good par-saves. Really I would say the reason I won today was eight through 11, digging in and playing those even-par. I looked up and saw I had four or five (shots in the lead) at the time and I thought I maybe needed to change a strategy a little bit. That's what we did and it actually led to four more birdies somehow.''

That is when you know that you are on; when you pick up four more shots, including birdies at the last two holes, when you are only trying to preserve a lead. It was that kind of day, although Spieth feels he has much work to do to achieve his aim of being world No. 1.