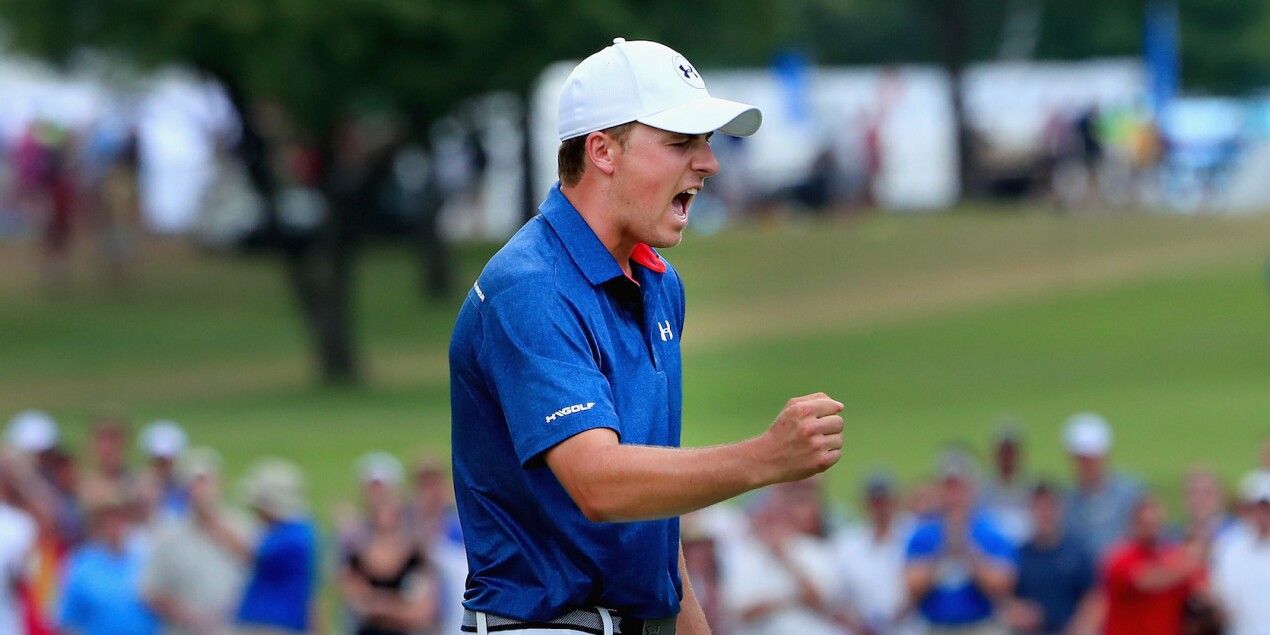 Jordan Spieth has a win at home in the Lone Star State.

Spieth won at Colonial after birdieing the last three holes Sunday for a 5-under 65, including a chip-in from behind the 17th green following a fortunate bounce off a marshal. He punctuated his first PGA TOUR victory in Texas with a closing 34-foot putt when needing only a bogey to win.

It was the eighth career win for Spieth, the World's No. 2-ranked player, and came in only his third tournament since blowing a five-stroke lead on the back nine last month when trying to win the Masters for the second year in a row. He will try to defend his U.S. Open title in three weeks at Oakmont.

At 17-under 263, Spieth finished three strokes ahead of Harris English (66) at the DEAN & DELUCA Invitational.

This day is a moment that will go down, no matter what happens in the next 30 years, as one of the most important days I’ve ever had. Jordan Spieth

Colonial member Ryan Palmer and Webb Simpson tied for third, both shooting 68 while in the final group with Spieth to finish at 13 under.

Spieth started the back nine with three consecutive birdies before his only bogey, which could have been much worse after going into a bunker well left of the par-3 13th and then blasting a shot over the green. Then at 14, after hitting his drive into a fairway bunker and shouting after his shot short of the green, he saved par with a 14-footer that rolled just to the right edge before falling into the cup.

After a 20-foot birdie at the par-3 16th, Spieth hit a wayward tee shot at the 17th. The ball ricocheted off the lower leg of a marshal and into the first cut of rough instead of much heavier stuff. Spieth signed a glove "Thanks" to the marshal, but his approach from 173 yards sailed over the green before he chipped in after relief from a temporary structure.

Nearly two months before his 23rd birthday, Spieth broke a tie with Tiger Woods for wins at age 22 or younger. The only player with more that young was Horton Smith with 14 from 1928-30.

With the first-prize check of $1.2 million, Spieth has earned more than $24 million on the PGA TOUR.

Colonial was Spieth's third consecutive tournament since his month-long break after the Masters seven weeks ago. He missed the cut at THE PLAYERS Championship before tying for 18th last week at the AT&T Byron Nelson, when he went into the final round alone in second place at the tournament where six years ago as a 16-year-old amateur he finished tied for 16th in his first PGA TOUR start.

Spieth started Sunday with nine consecutive pars, including a 32-footer at the par-3 No. 8 after hitting his first shot into heavy rough.

His first curling 20-foot birdie at the 10th started his back nine before a pair of short birdies.

Spieth hit a wayward tee shot at the 192-yard 13th, almost immediately pointing his 7-iron to the left and shouting "Fore!" He then yanked his ball out of the bunker over the green before a chip to inside 3 feet for a bogey.

When the final group was introduced before teeing off at No. 1, in the shadow of the Wall of Champions, the applause and cheers for Palmer were as loud as those for Spieth.

Palmer opened with consecutive birdies to go a stroke ahead of Spieth for the lead. He got to 14-under after a 12-foot birdie at No. 7, which he followed by reaching back for a hand slap with caddie James Edmondson, the four-time Colonial club champion.

But Palmer had two bogeys and not another birdie until the last hole, after Spieth had already made his final putt.