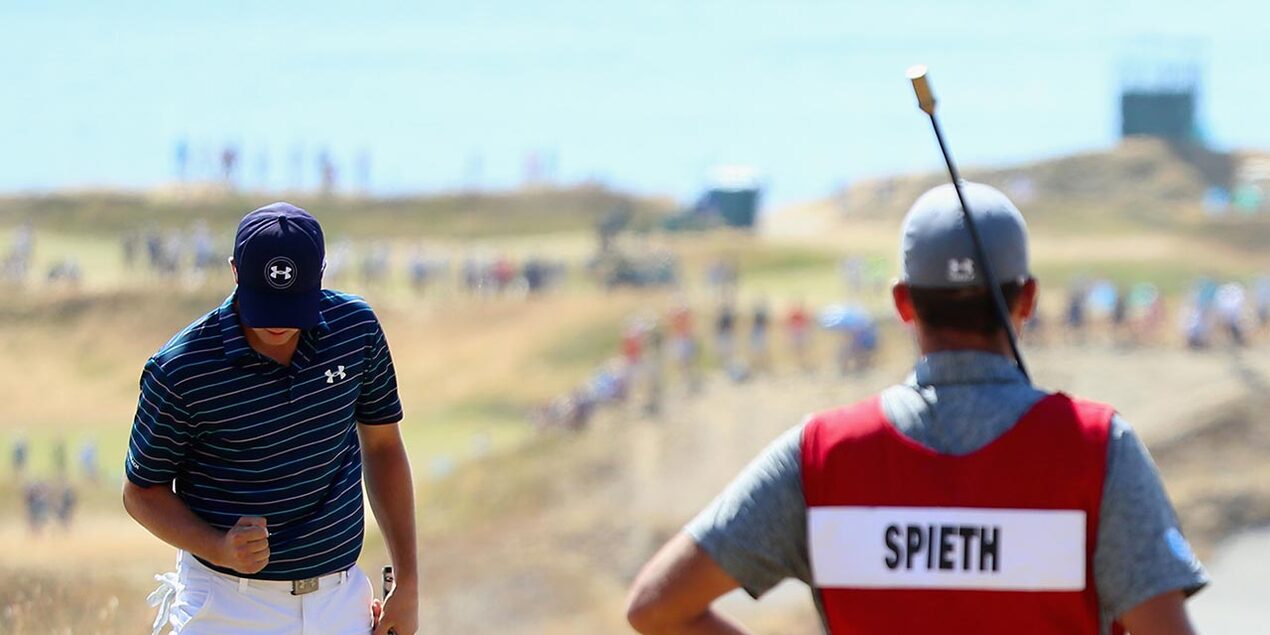 The Masters two months ago. The U.S. Open on Sunday. Jordan Spieth is now halfway to the unthinkable – the single-season Grand Slam.

The 21-year-old Texan shot a 1-under 69 to win by one stroke over Dustin Johnson and Louis Oosthuizen in an intense -- and insane -- final round at Chambers Bay.

Spieth, finishing at 5 under for the tournament, becomes the youngest U.S. Open champ since Bobby Jones in 1923 and the sixth player to win the Masters and U.S. Open in the same season.

Next month, he'll go to St. Andrews looking for the third leg of the Grand Slam at The Open Championship.

"Can't win 'em all unless you win the first two," Spieth said. "We're going to go to St. Andrews looking for the Claret Jug. I believe we can get it done if we get the right prep in."

Spieth credited his caddie Michael Greller during the trophy ceremony on the 18th green. Greller, from nearby Gig Harbor, used to caddie at Chambers Bay and provided invaluable local knowledge.

"He's my right-hand man," Spieth said. "He's the only other guy who can control the outcome on the course."

It wasn't easy and it was definitely not for the faint of heart.

Johnson had a chance to win the U.S. Open outright on the final hole. But he missed a 12-foot eagle putt. Then with a chance to force a Monday 18-hole playoff, he missed a 3-footer for birdie, his three-putt resulting in another lost opportunity to win his first major.

"I'm disappointed that I 3-putted the last hole," Johnson said. "Other than that, I had a damn good week. I'm happy with the way I played."

Said Spieth: "I feel for Dustin ... I'm still amazed that I won, let alone that we weren't playing tomorrow."

Spieth and South Africa’s Branden Grace were tied for the lead going into the 16th hole. But Grace’s tee shot went out of bounds near the railroad tracks on the right side of the hole, and he ultimately double bogeyed.

Meanwhile, Spieth rolled in a clutch birdie putt from 25 feet. Suddenly, he had a three-stroke lead.

But it evaporated just as quickly. Spieth hit a wayward drive at the par-3 17th and then three-putted for double bogey. Up ahead, Oosthuizen rolled in his final birdie putt – his sixth birdie in the last seven holes – to tie Spieth for the lead at 4 under.

That left Spieth needing a birdie at the 18th hole to avoid a playoff. With the 18th playing as a par 5 on Sunday, Spieth avoided the fairway bunkers, then hit a brilliant second shot that curled toward the pin, leaving him a 18-foot putt for eagle.

But just before he reached his ball, Dustin Johnson was rolling in a short birdie putt at the 17th to join the leaders at 4 under, putting more pressure on Spieth to make his putt instead of settling for a two-putt birdie.

His putt just slid to the left, and he tapped in to take the lead at 5 under and eliminate Oosthuizen from contention. But 250 yards behind, Johnson waited with a chance to win for an eagle. His 5-iron rolled ito 12 feet, but he couldn't capitalize.

Johnson didn't blame the condition of the green for his missed birdie putt, but did say, "When they are fast and bumpy, it's tough to get it in the hole. Whatever the putt did on the last hole, I don't know. I might have pulled it a little bit. But still to me it looked like it bounced left. It's tough. It's very difficult."

"It's never nice seeing that," Oosthuizen said of Johnson's three-putt. "We all get in those situations. I was pretty sure it was going to be a Monday finish."