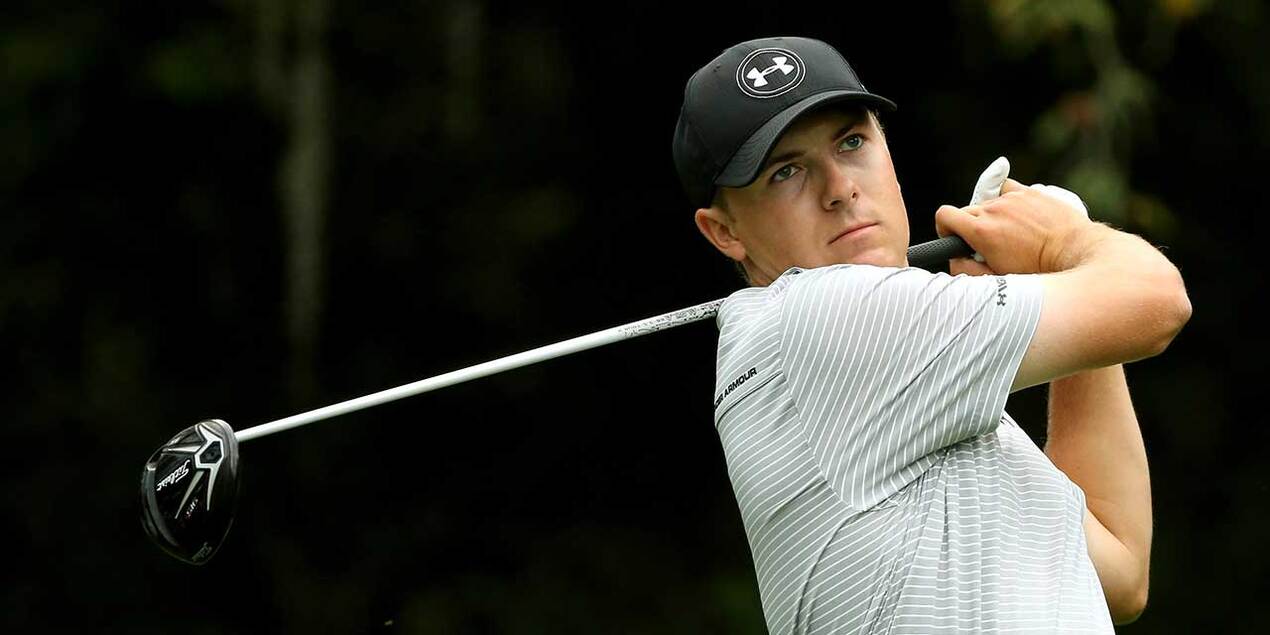 PHIL STAMBAUGH:  We're joined this afternoon in the interview room by Jordan Spieth.  Jordan, you're making your 3rd consecutive start here at the Valspar, tied for 7th in 2013 which gave you special temporary membership out here; 7th start of the season, three Top-10s including a tie for 4th at the Northern Trust Open.
Just some thoughts about coming back to the Valspar Championship and playing here at Innisbrook.

JORDAN SPIETH:  Yes, very excited.  Great memories here.  Played a couple of junior events back here in the day as well.  Two years ago definitely a tournament in the final round that I look back on at the end of my career and say that was one of the best days of golf I ever played.  Well, maybe not the best I ever played but the most important finishing couple holes that I ever played, holing kind of a flop shot on 17 and then big par save on 18 to close 7th versus 13th which would have made it a lot harder to earn my card through exemption.

So, great memories as we go through and played the Pro-Am today.

Q.  Do you enjoy a course like this where you leave the driver in the bag on some holes?
Yeah, certainly.  The driver was out -- I felt like I hit driver -- the ball is not rolling through the fairways right now.  For whatever reason, it's a little softer out there.  You actually hit driver on some holes.  We were going over that.  You can hit driver -- depending on which direction the wind is coming from, you either hit a lot of drivers or hardly hit any.

Yeah, something that's challenging.  The course plays longer than the yardage, no doubt about it.  But I enjoy the challenge.  You really have to be in the fairway out here and so whatever it takes to put it there, whether it's driver or you got to go back to a hybrid or 2 iron.

Q.  With this tournament being in the middle of the Florida swing, just less than a month before The Masters, do you feel like this tournament, that could really jump start somebody's year, especially some of the lesser known players like the past couple years?
I think so, definitely.  This course, like I just mentioned, it's a very difficult golf course compared to if -- on a scale, it's definitely tougher than average.
If you see guys that come out and play well here, they're likely to play well on the harder courses and the bigger tournaments just because that kind of course suits their game more, I guess.

You have to work the ball both ways here.  It requires all sorts of shots, punch shots, launching it in the air and obviously some discipline on the greens. So, yeah, it's a tournament to watch for somebody to start to break through.  Right around this time of the year you start to see that a lot guys get more comfortable in events and that's certainly how it was for me coming out, started to feel more comfortable than maybe my first couple of starts as a pro and just getting kind of my feet in the water and testing it out and gaining confidence.

So, yeah, on a tough course at this time of the year it certainly can be.

Q.  Do you feel like some of the bigger named guys don't do this event in preparation just for Bay Hill and The Masters not to overwork themselves in this month right here in this swing?
I'm not sure.  I think a lot of guys live in or near Orlando and so either that or they're in Palm Beach where Honda is and obviously the World Golf Championship in between, it's hard to play four in a row and then lot of guys want to go play either Houston or San Antonio. You got to take a week off at some point.  Seems like more players live on the other coast than live over here so maybe that's it for them.  Not sure.  But for me, I really like this place.

Q.  This course is a ball striker's golf course.  When somebody says that, what does that mean to you guys?
Well, it can mean two things.  Very tough to hit fairways and greens, so it can mean that the greens are not as severe. I think both are kind of true here.  The greens aren't very severe here.  They're grainy and certainly they can be very quick in certain places where they can put pins but they're not going to be greens where you really, really worry too much about your speed control.  You can be aggressive putting out here which is nice.

But it's tough.  I mean the wind -- in the past couple years the wind has picked up.  Looks like we may get really lucky this week, these next four days and not have much wind and scores could be lower, especially with the softer conditions than previous years.

Yeah, it's still tough to hit the fairway and the greens, the rough is really sticky and if you're a foot off the green and it just off the fringe, it's about -- that's as tough as it gets because the rough is not quite high and thick enough to where you just play like a bunker shot and it's not thin enough to where you can hit a normal chip.  You got to almost feel like your way through and try and judge it perfectly.

Greens in regulation will be a very important stat this week.

Q.  Having that tough finish, does that change your approach to how you enter this tournament at all or is it --
Last three holes?

Q.  Yes.
No.  I don't think 18 is extremely challenging.  16 and 17 certainly are tough.  But no, it's not exactly -- it's not really a hole out here, I guess 16 if you had to say one where you're thinking about it as ahead of time as a hole that's tremendously important in deciding the championship but yeah, I mean a lot of the holes are tough.
The holes -- I think 15, 16, 17 are the Snake Pit in my mind.  15 can be hard in the wind.  But you get a couple birdie holes around there, par-5s you can take advantage of if you play them the right way.

I can't speak for everybody but from guys I've talked to, there's not really much of a focus on being scared the last few holes but it's nice to have some challenging holes to finish where you have to hit great shots.

Q.  Snake Pit or the Bear Pit?
I hadn't played the Honda but I played the Bear Trap in Junior Golf.  I couldn't speak to that tournament.  Anytime you have two par-3s with water around it's not going to be a whole lot of fun.  I'm not a big fan of water.  Bunkers are a lot more fun for me.

Q.  Wind the way it was today I guess it was 10, 15, is that enough to affect scoring?
Yeah.  It only picked up on our last four holes.  We had nothing, we couldn't even figure out what it was doing this morning. On the back-9 we got stopped for awhile, played it a little slower.  When it started to pick up it definitely affected scoring.  That's what makes it really challenging, when these fairways are soft and the ball is not really bouncing through them, then the wind is really the factor to make this course, the scores go up because if it were a day like today, if it were playing like this morning, you'll see a couple 8, 9-under, or maybe a 8, 9-under out there if someone is really putting well.

Q.  Just getting back to where this tournament sits in the schedule between Honda and Bay Hill, do you see yourself as kind of a regular out here just judging on your brief history here?
I really like this place, I really like this tournament and this golf course and enjoy my time here. Next year is a tricky schedule. I haven't looked at it yet. I know everything is getting mixed up with the Olympics and Match Play moving around and having two World Golf Championships really close together I think next year.
Guys can't play every event. Obviously the focus on The Masters around this time of year so whatever is going to best prepare me. I don't know exactly what that schedule will be yet.

Q.  Talking about when you felt comfortable, when it got to the Majors, when you go to the Majors this year, do you have total comfort when you arrive at Augusta?
I don't think total comfort.  I think at Augusta more than any other Major because I've now played it 20, 25 times, I think being on the grounds that many times -- obviously tournament week I can't speak because I haven't gone back to it yet having only played once, but I'm staying in the same place, trying to go through the same routine ahead of time so hopefully I get there and feel very comfortable.  I was comfortable last year. I was really excited and pumped up and I think that helped me.  So part of me wants to obviously be comfortable but it's nice to have that blood running even on Thursday and Friday in the middle of the round that you don't really get many other places.

Yeah, not quite on that level though where -- I haven't played enough of them yet.  I think I played 8, 9 Majors now.  I think I played all four two years -- I played 8 Majors I think now and I think once you maybe double that is when you start to get really comfortable, you know.  I don't know. I don't know if Tiger is still comfortable playing Majors. I'm sure he gets his blood running sometimes, too.