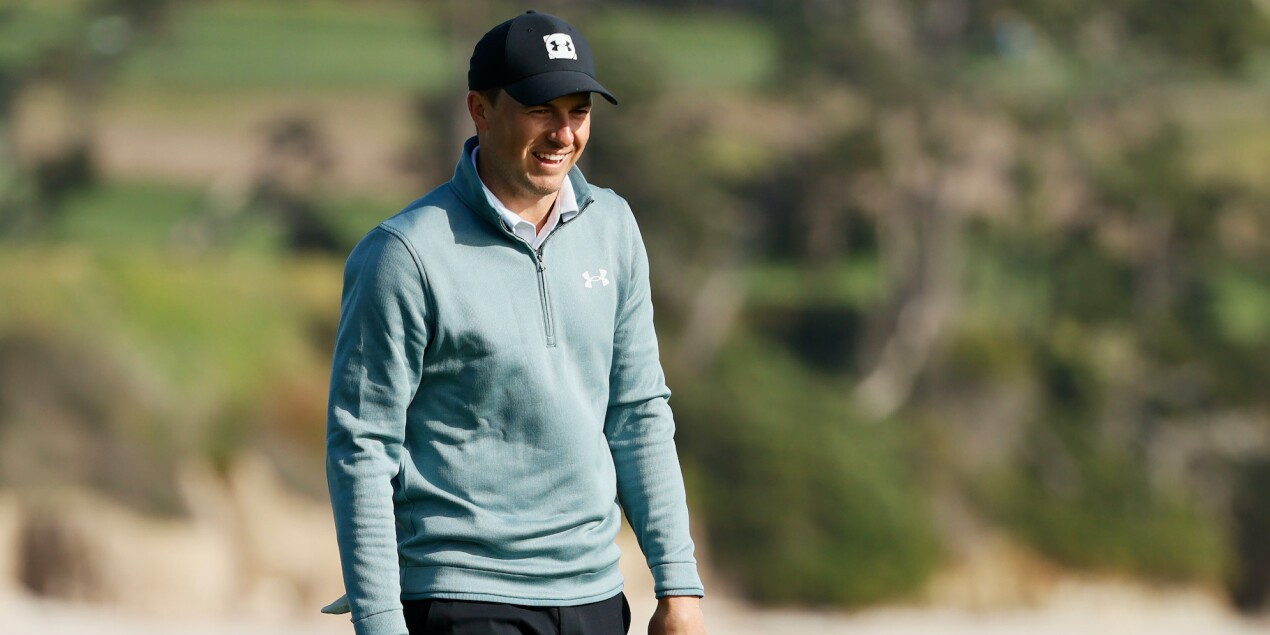 Saturday at the windswept Pebble Beach Golf Links, home to the AT&T Pebble Beach Pro-Am, was one of those afternoons to keep the head down and just hang in there. Jordan Spieth knows all about that drill. The former World No. 1 has been doing it for more than three years now, with no trophies to show for his work.

That could change Sunday at Pebble Beach, a place where Spieth won four years ago, when he struck the ball, in his words, “on a string” all weekend and cruised to victory. Winning again at Pebble on Sunday will take a little more elbow grease and fortitude. For the second consecutive week, Spieth, 27, an 11-time PGA TOUR winner and three-time major champion, will carry at least a share of the lead into Sunday, seeking to win for the first time since The Open Championship in 2017 at Royal Birkdale.

At 13-under 203, Spieth leads a fivesome of players – Daniel Berger (72), Tom Hoge (68), Russel Knox (69), Patrick Cantlay (70) and Nate Lashley (68) – by two shots. Spieth knows the pieces are all there – the grit and mental toughness and innate ability to score as few golfers can – and realizes that great golf still bubbles somewhere inside him. Now it’s a matter of summoning his talents to the surface on a Sunday, the day that matters most.

Spieth was muddling through a difficult back nine at Pebble on Saturday when, as sometimes happens with him, thunder cracked. From 165 yards out on the par-4 16th fairway, and with mud caked on the right side of his golf ball, Spieth drew an 8-iron shot that pitched perfectly, spun left, trickled toward the hole and took one long, last look at the surroundings before tumbling into the cup for an eagle-2. It was Spieth’s second hole-out eagle on the week, joining the wedge he spun into the hole for an eagle at Pebble’s 10th on Thursday in his opening 65. After making bogeys on three holes in five-hole stretch on the back nine to fall out of the lead Saturday, Spieth suddenly was tied atop the board again.

Lashley, the 2019 winner of the Rocket Mortgage Classic, bogeyed his final two holes, three-putting the par-3 17th and driving it into the rocks at the par-5 18th, a tough finish to an otherwise solid round of 68. Berger, playing alongside Spieth, hit his drive one foot out of bounds on the closing hole, making 7. After being in control most of the day, building on his own eagle at the par-4 fourth, Berger was able to balance a closing double with thoughts he’ll be only two back come Sunday. Given how his back nine was going until that one fateful swing, Spieth seemed to be as surprised as anyone to be leading by two at day’s end. That’s golf, right?

“It shows you how quickly things can change on this golf course, especially when the wind blows,” Spieth said.

Last Sunday at the Waste Management Phoenix Open, Spieth shared the 54-hole lead into Sunday on the heels of a sizzling, career-low, third-round 61. But he struggled in the final round with his putting and played pedestrian golf, closing with 72 as Brooks Koepka sped past him. Spieth felt the nerves in trying to win for the first time in a long time. Sunday promises to be a challenge, too. But week over week, he senses that he’ll be better prepared for it.

“I don't really care about the ‘time frame’ stuff,” Spieth said after posting a 1-under 71 Saturday. “I'm really just going to throw that out of my head, because I'm finally consistently doing things over the last two weeks that I've wanted to do for a long time.”

Spieth’s victory at Pebble Beach in 2017 launched a huge season for him. He beat Berger in a playoff at the Travelers Championship with an incredible bunker hole-out, and then won the third leg of a career Grand Slam by capturing The Open at Birkdale. Spieth was just shy of his 24th birthday, and sailing.

Then his ball-striking challenged him, and the putter that once scoffed at 25-footers didn’t prove as reliable as it once was. Spieth hasn’t vanished as some top players have in the past – there have been plenty of top 10s as well as Presidents and Ryder Cup teams – but he also knew he wasn’t the 92nd-ranked player in the world who he teed it up in Phoenix, either. (Spieth rose to 69th on Monday.)

Just as was the case when Spieth was a hot-shot rookie earning his card, he must learn to win all over again. It’s a process, he will tell you, one centered on being better today than he was yesterday. If he does that Sunday at Pebble Beach, Jordan Spieth will be just fine. Lessons learned last week will not be any more pertinent or significant than the one that he was reminded of with one golden swing on Saturday.

“Yeah, I think (there is) quite a bit that I can take off of last week,” he said, “but also from today, and how quickly things change.”