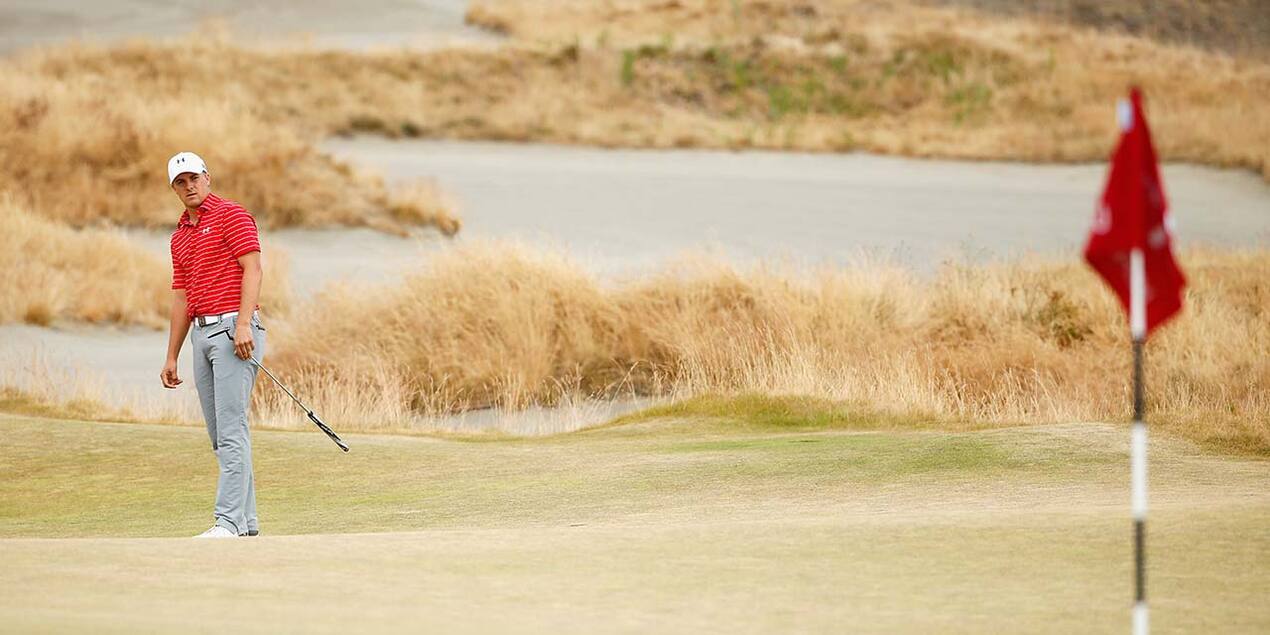 Jordan Spieth, who has risen to No. 2 in the world and claimed his first major at age 21, made a slow ascent on the rolling hills at Chambers Bay on Thursday. The Dallas native traversed a couple of miles of rugged terrain without making a move over the front nine.

But the Masters champion compensated with a dramatic stretch, announcing his arrival with three straight birdies starting on No. 11. Although he gave one back with a bogey on 15, Spieth put himself squarely in the mix with a 2-under 68.

Spieth’s ability to make a run late in the afternoon was significant on several levels. Playing conditions worsened as the long day wore on, yet he still managed to finish tied for seventh.

“It was a long walk but a good one,” said Spieth, who played with Jason Day and former U.S. Open champion Justin Rose said. “I didn’t really know what to expect.”

Spieth will tee off at 10:17 a.m. Dallas time, so he should have calmer conditions. He also has a better idea of what to expect from the links-style course with its unpredictable fairway rolls and undulating fescue greens.

Most of the low scores were shot in the morning when the greens were slower and more receptive.

Scores soared as the wind increased on an overcast afternoon. The breezes affected club selection — on a course that is relatively unfamiliar to most players already — and hardened the greens.

On a layout bordered by a train track, there were plenty of train wrecks. Tiger Woods (80) and Rickie Fowler (81), who played together, finished a combined 21 over. Major champion Louis Oosthuizen, who played with them, shot 77.

“I think we’re happy just to be upright, alive and moving on with the day,” Fowler said.

Spieth, Day, Campbell and Ben Martin were among the exceptions during the windy afternoon.

“It made a big difference,” Spieth said. “I think it’s advantageous if you get a little wind out there. I thought it was pretty cool.”

He started slowly, making primarily two-putt pars from distance over the first 10 holes. He played like a veteran, patiently grinding for pars when he couldn’t get close early.

He shrugged off mistakes and stayed focused on the next shot, a difficult prospect on this tricked-up layout. It’s easy to get frustrated with the speed of the greens varying on different parts of the course because of the elevation changes.

“I never played an entire hole in a major championship without one single person in the gallery,” Spieth said. “It was eerie.”

Things changed after Spieth made the turn. He birdied 11, 12 and 13, suddenly moving to 3 under. His only bogey on the back nine was on the downhill par-3 15th.

“I think today was the most scorable this course will be,” Spieth said. “It's only going to get more challenging from here.”