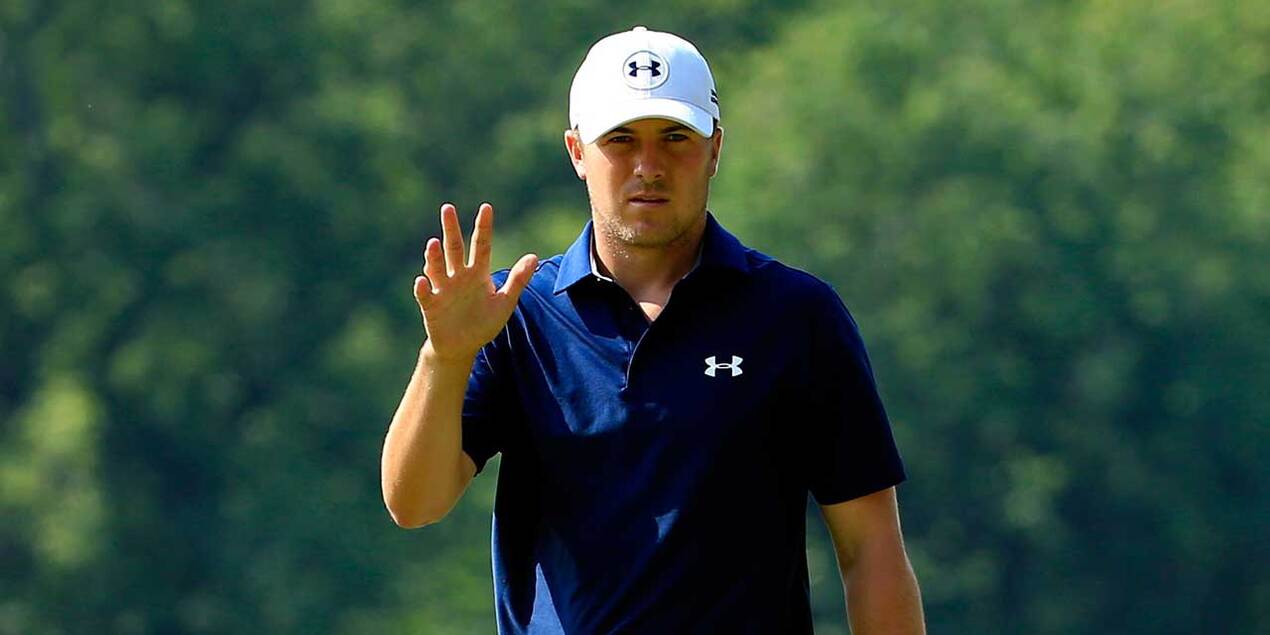 The frustration was mounting, the bad breaks were multiplying and the possibility of a Jordan Spieth trunk-slam ahead of his bid for the Grand Slam felt like a real possibility.

Spieth countered mud balls, a balky driver and putts that continued to burn edges Friday morning at the John Deere Classic. And still, he improbably managed to make the midway turn 3 under for the day and for the tournament, squarely on the cutline.

The young Texan ran in a 10-foot birdie putt at the TPC Deere Run first, his 10th hole of the day, then pumped a 241-yard approach to within four feet for eagle at the second.

That quickly, he was 6 under and onto the weekend, back in the hunt at the tournament where he claimed his maiden victory two years ago.

“Then the cutline was out of my head and it was ‘How can we move up the board a little more,” he said on the heels of a 7-under round that left him within a few shots of the midway lead.

As importantly, Spieth will have 36 more holes to hone a golf swing he declared “rusty” after an even-par 71 on Thursday in advance of next week’s bid for history at The Open Championship.

At the birthplace of golf, the 21-year-old winner of the year’s first two major championships will be bidding to become just the second player to win the first three legs of the modern Grand Slam. Only fellow Texan Ben Hogan, in 1953, has managed that.

“Just another round of golf,” he said. “This was the third round I have played since the U.S. Open. I’m getting on-course reps and it is making a difference.”

Through four Friday holes, Spieth was still at even par on a golf course yielding birdies by the bunch. But a kick-in birdie at the short par-4 14th got him below par for the first time this week and a downhill 20-footer that never left the hole at the signature par-3 16th kept him moving forward.

“The putt at 16 was really big,” he said. “I knew I had a lot of birdie holes left — kind of needed to steal one that I maybe didn’t think I would get.”

He managed par after an over-hooked drive at the par-5 17th dropped into a gnarly sidehill lie with more than 370 yards left to negotiate. After a big drive at 18, Spieth flung his water bottle to the ground when he found his ball sitting down in a fairway divot. But a chat with caddie Michael Greller seemingly left him more bemused than befuddled. He managed to leave himself an uphill 15-footer for birdie and he drained it.

“I think really the putt at 18 was as important as any,” he said. “I’ve had multiple mud balls and had quite a few balls roll into divots. Just tough breaks here and there. I walked up and it was in a divot pointed at the middle of (a greenside pond).

“It was somewhat of a tough break, but I think I got a pretty good bounce,” he said of an approach shot he initially labeled “so fat” and implored to “go, go, go.” It did.

Now, Spieth is in position to challenge for the fourth win of his career, and he said the challenges he has overcome so far at the Deere should serve him well at St. Andrews.

“I think today was a big day,” he said. “I made a huge step forward based on how I felt when I was going to bed yesterday. I wasn’t feeling good about my game and to come out and shoot a round like this when I didn’t feel like tee to green I was very strong … Just made it work and took advantage of a couple of holes.”

Spieth’s 7-under total matches his midway scores the past two years at Deere Run, where he finished T7 a year ago and, in 2013, scored the come-from-behind victory that has helped carry him to No. 2 in the world rankings.

“We can do it again,” he said. “Today was a solid round to get myself in a position to make a run at it.”

And, then, perhaps, make a run at history.

“I’m excited to go next week just because I love St. Andrews,” he said. “It is going to be an exciting atmosphere, and it may be good for me to have a limited amount of time there. I feel like I’ve gotten a good amount of practice in and I’ll be able to adjust to the speed and the conditions there. I feel like I’ll be able to do that in a couple of days.