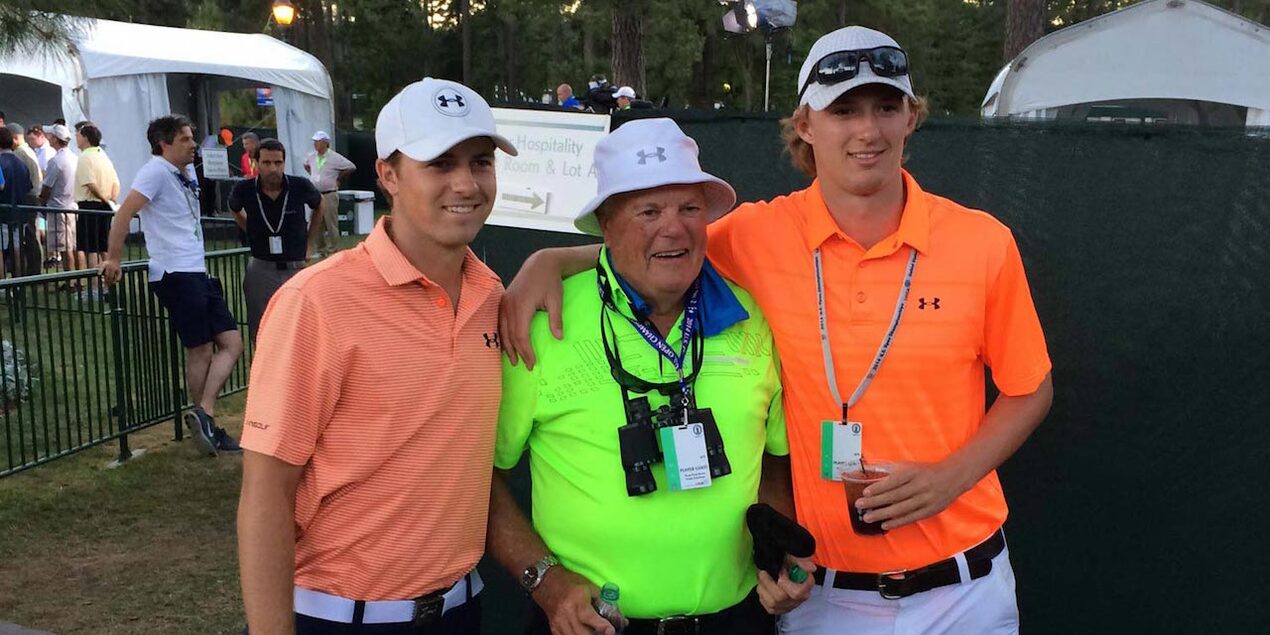 The younger brother of America's newest sports star is sitting on the floor inside the Pizzitola Center at Brown University.

His name is Steven Spieth, and if you have to ask who his brother is you simply haven't been paying attention.

All his brother did last weekend was run away with The Masters, tie Tiger Woods for the lowest score in the history of the event, and turn himself into a national celebrity in the process.

And if that weren't enough, Jordan Spieth also tugged at America's heartstrings with the back story of his 14-year-old sister, Ellie, who has a neurological disease, and is the family's inspirational star.

So the obvious question to Steven Spieth?

"When did you know your brother was good?"

"I think when he was about 10 or so and he won the junior club championship twice," he says.

This was happening in Dallas, though the family's roots go back to eastern Pennsylvania, where his father once played baseball at Lehigh, his mother played basketball at Moravian, and his paternal grandfather is still the longtime conductor of the Lehigh Valley Chamber Orchestra.

"I knew he was really good when he twice won the U.S. Junior Amateur title,'' he says. "It was the first time since Tiger."

"Yeah, it has been pretty insane," says Steven Spieth.

Which is maybe where his little sister, Ellie, comes in.

There's no question that her two older brothers have been influenced in ways that were no doubt unimaginable when she was born. Jordan Spieth has been quoted as saying that when he sees her at the airport after returning home from a tournament "it doesn't matter anymore if I played badly. She is someone you can watch and reflect on the big picture of life."

Steven Spieth echoes similar sentiments, for his parents and sister have been to several Brown basketball games the last two seasons.

"You walk out of the locker room and you see her. See how excited she is to see you, and you realize that it's just a game. My brother and I both realize that, and she is the reason."

Last weekend he was at The Masters, right there in the shot of Jordan Spieth coming over to embrace his family as he walked off the 18th green as the country's newest sports hero. There were about 50 people in the Spieth entourage, and many split their time between two rented houses. The game plan was to keep things as low key as possible, watch some TV, play some cards, anything that Sunday afternoon at The Masters and all the old ghosts.

Jordan Spieth spent one year at the University of Texas, where the team won a national championship, before turning pro. And from the beginning it has been an almost seamless transition, as if he was born with a swing to die for and temperament to match. No throwing clubs. No obvious signs of temper. No visible signs that the pressure was starting to sit on his shoulders like some leaded weight. Just a guy walking around The Masters on a Sunday afternoon, one of the biggest days in American sports, appearing as calm and relaxed as someone who sneaked out of the office on a summer afternoon to get a quick 18 in.

That is one of Jordan's Spieth's great gifts as a golfer, and who knows, maybe it does come with having a little sister who can't wait to see you, no matter how you played.

That is Steven Spieth's take anyway.

And make no mistake, Steven Spieth is an excellent athlete himself, a 6-foot-6 junior-to-be who averages nearly 10 points a game and has been a starter since he first arrived at Brown, a versatile player who had a great game in the Bears' upset win over Providence College last season. He also was a decent golfer himself as a young kid before deciding to concentrate on basketball.

So was golf the road not taken?

Yet he also knows how crazy it all is, his brother being the country's newest sports rage, a name that now everyone knows.

So what does it all mean to him?

He looks away for a second, as if looking at a future only he can see.

And when he turns back he has a smile on his face.

"I think I'll be going to The Masters for a long time,'' says Steven Spieth.