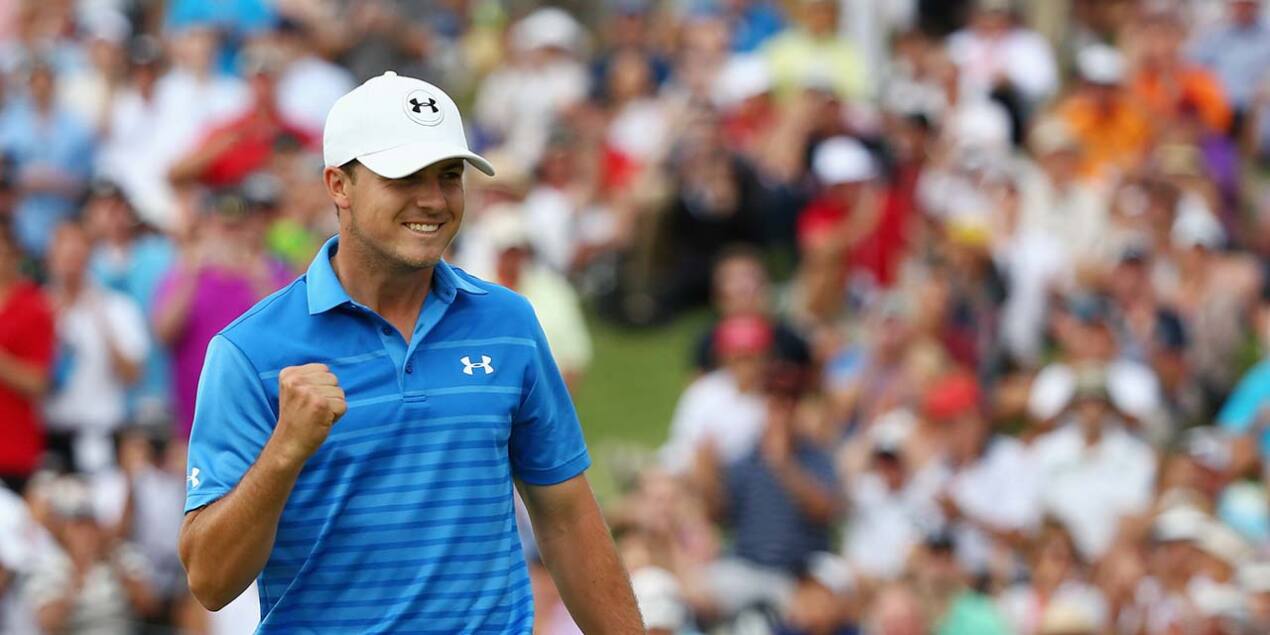 Jordan Spieth played the best round of an already impressive career with an 8-under 63 on Sunday to win the Australian Open by six strokes, making his first trip Down Under a successful one.

Spieth's 72-hole total of 13-under 271 on the tough, windy Australian Golf Club made him the first American to win the Australian Open since Brad Faxon in 1993, when the 21-year-old Spieth was four months old.

"It's the best round I have ever played, especially considering the conditions," Spieth said. "It was just kind of one of those rounds when you're in the zone and you're not sure what you're at. It's nice that it came on a Sunday."

Spieth birdied four holes on the front nine -- three of them in a row -- to lead by three strokes after nine holes, then made light of the challenging, windy conditions by adding four more on the back nine, never threatening to lose his lead.

"You don't want any kind of crack in the door to be open and I felt like we kept it shut from the front nine on," Spieth said.

Spieth's score was a record for the revamped Jack Nicklaus-designed layout which was being played as a par 71 for the first time. On Friday, Jamie Lovemark of the United States shot 65.

Adam Scott shot 71 and finished fifth, nine strokes behind. Defending champion Rory McIlroy, who shot 76 on Saturday, finished with a 72 and was 2-over, 15 strokes behind Spieth.

Three Australians who finished closest to Spieth earned trips to next July's British Open. The Australian Open is the first qualifying tournament for the 2015 Open Championship and offers three spots to the top finishers not already exempt.

Gusty northeasterly breezes played havoc all week with scores, and only eight players finished under par.

Chalmers and Spieth were tied for the lead at 6-under after four holes, but Spieth birdied the par-5 fifth where Chalmers made bogey for a two-shot swing. The American also birdied the sixth and seventh holes, made a fine par save on the ninth, then did the same on the 10th from about five feet, pumping his fist as he edged closer to the title and the Stonehaven Cup trophy.

It was Spieth's first win of 2014, and second of his pro career -- he won on the John Deere Classic in a playoff on the PGA TOUR in 2013. Although he hadn't won this year, he was runner-up in the Masters and had eight top-10 finishes in 24 TOUR starts.

He was reminded that last year's Australian Open win by McIlroy was his only victory that year, and the Northern Irishman went on to win two majors and have an outstanding 2014.

"If I had the follow-up year that Rory had this year, I'd be pleased this time next year," Spieth said.

McIlroy's 76 all but ended the defense of the title he memorably won in 2014 with a birdie on the last hole to deny Scott the Australian Triple Crown.

"It's been tough all weekend," McIlroy said. "I was trying to get something going but with the pin positions and the wind, it was just very hard to get the ball close to the hole. It just wasn't meant to be this year."

There were tributes around the golf course Saturday and Sunday for Australian cricketer Phillip Hughes, who died Thursday after being hit by a ball during a match at the nearby Sydney Cricket Ground.

The number 63 was used in many of them, as that was the number of runs Hughes had scored before he was fatally injured. Spieth provided the final reminder -- and an unintentional tribute -- by finishing with a round of 63.

Get More PGA News at PGATOUR.com