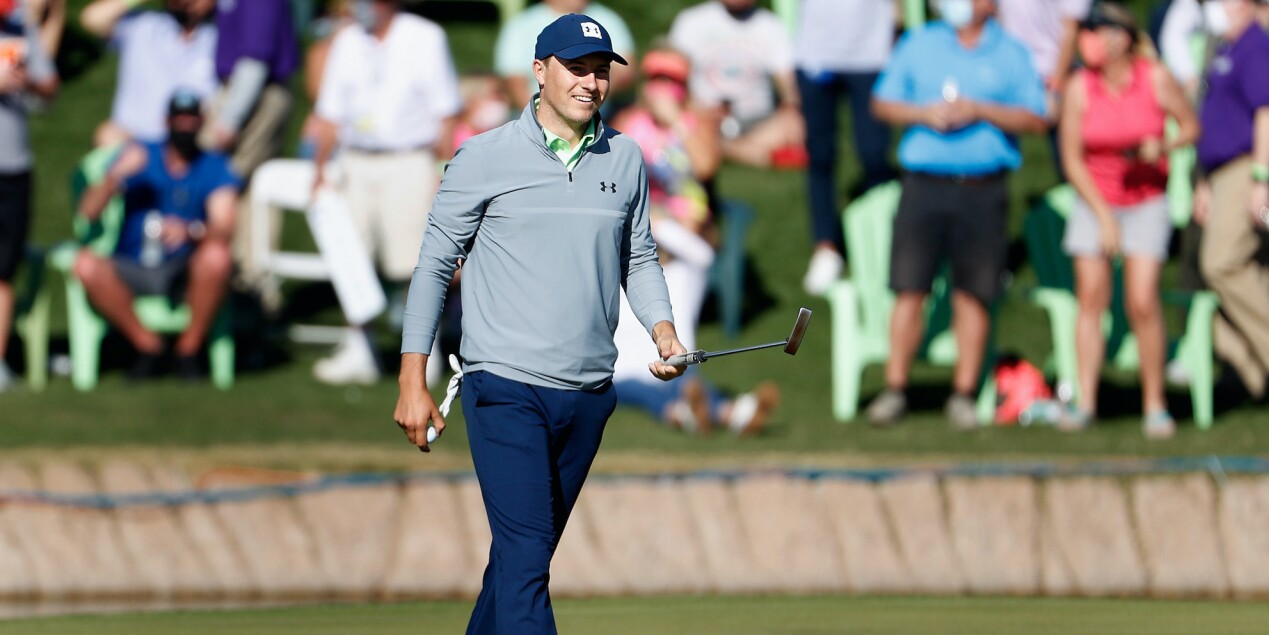 The birdie putts from all quadrants, the quiet but unmistakable swagger when he’s on, the erratic long game that he still turns into red numbers given any break at all – it all adds up to a show unlike any other on the PGA TOUR. You cannot look away.

“I'm excited about the position I'm in,” said Spieth, whose third-round 61 tied his career low on TOUR and moved him into a tie for the lead with Xander Schauffele (65) at the Waste Management Phoenix Open. “I don't have – I'll be nervous, but not because I feel extra pressure to have to do anything. Just because I haven't been in the last group holding the lead in a while.”

Yeah, you could say that. Last time he played in the final group, final round, was the 2018 Open Championship – with Schauffele. A win Sunday would come three years, six months and 15 days since Spieth won the 2017 Open Championship. Of his three made cuts in seven starts this season, his best result was a T38 at THE CJ CUP @ SHADOW CREEK.

A lot of people could still win this tournament. Spieth and Schauffele, who hasn’t won in over two years, hold a three-shot cushion over K.H. Lee, who shot his third straight 66, and Scottie Scheffler (66), each of whom will be looking for his first victory. (Scheffler, Spieth and Schauffele, who will make up the final group Sunday, are all former Rookie of the Year winners.)

“Just got to be within three on the back nine,” said Koepka, who got his first win here in 2015 but had missed three straight cuts coming into this week. “Anything can happen here. Obviously with quite a bit of water off the backside, especially on 11 and 15 and 17, you can make a bogey very quickly. If you hit a good shot, you can make birdie. It's good risk/reward.”

Risk/reward also describes the ebbs and flows of watching Spieth. He reached world No. 1 in a five-win season that included two major titles and the FedExCup title in 2015. Soon, though, he was headed for the lowest lows. Interminable range sessions that went nowhere because it turned out he was working on the wrong things. Lost weeks, lost months, lost years.

But now? He came into this week at a distant 92nd in the world, 179th in the FedExCup, but suffice it to say that if Spieth plays the final round like he did the back nine Saturday, he will win. With his long-range, chip-in birdie at 10, his nearly 40-foot birdie putt at 16, and his nearly 30-foot birdie putt at 17, he was back to being the human highlight film his fans remember so fondly.

“I mean, you know, it was vintage Jordan to a certain degree,” Billy Horschel (71, 8 under) said after playing with Spieth for the third straight day. “Made a lot putts. Made some long bombs which he's normally used to. Got up and down and chipped in a couple times or chipped in once, and he still hit a couple bad shots but got away with them and made birdie from them.”

An exciting Sunday on tap for @JordanSpieth. ��

Spieth is sixth in Strokes Gained: Putting, gaining six-plus strokes on the field, and made over 125 feet of putts Saturday alone. The rest of it is still “a work in progress,” he said. He’s hit just 18 of 42 fairways this week, including six of 14 on Saturday.

Some of those misses, though, were by just a couple of yards, leaving him clear looks at the greens.

“He's really close, I think, with his swing to being automatic,” Horschel said.

Added Thomas, who is sharing a house this week with Spieth and Rickie Fowler, plus their significant others, two dogs, and a chef, “I've said that I know Jordan will get it back at some point.”

Like Spieth, Schauffele will be trying to break a long win drought Sunday and admits he’ll be nervous.

“Jordan was always way better than I was growing up,” said the world No. 4, who has racked up four top-five finishes in just six starts this season, including a T2 last week. “I did not see a whole lot of him, to be completely honest. I saw his name, but that's about it.

“We're both trying to do the same thing,” he added. “We both have a lot to prove. He's accomplished so much in his career. I'm still trying to push forward and do kind of what he's done in a short time. I think it's cool that we'll be hashing it out tomorrow.”