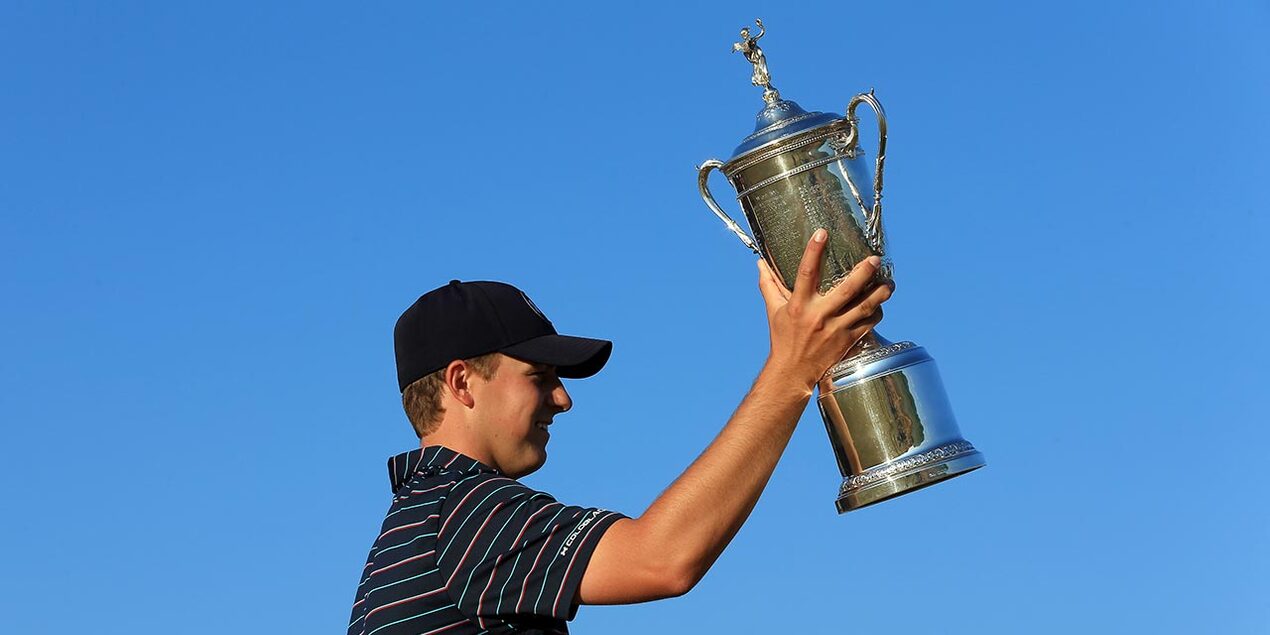 Halfway There
With the Masters and U.S. Open titles in hand, Spieth now goes to St. Andrews next month seeking the third leg of the never-been-done single-season modern Grand Slam (Bobby Jones captured The Open, U.S. Open, U.S. Amateur and British Amateur in 1930). Spieth said late Sunday that he couldn’t fathom completing the Grand Slam, and that his focus will be strictly on winning The Open Championship. It’ll be his last major as a 21-year-old (he turns 22 in late July).

Given that he just won on a links course, and with two more links courses left with St. Andrews and the PGA Championship’s Whistling Straits, the impossible seems slightly more possible for Spieth.

“After DJ hit his second shot in, I thought, ‘Shoot, I may have lost this tournament,’” Spieth said. “And just utter shock at the finish.”

Heartbreak for DJ
Facing intense pressure with each swing on 18, Johnson couldn’t have played the final hole any better from tee to green. In fact, you could argue that he played it better than Spieth, a massive drive setting up a great approach to 12 feet.

But whether that same pressure finally caught up to him, or whether the bumpy greens found one last victim, Johnson took three agonizing putts to navigate the last 12 feet.

It’s another major heartache for Johnson, who is now 0-for-4 in playing in the final group Sunday of a major.

“I'm disappointed that I three-putted the last hole,” Johnson said. “Other than that I had a damn good week. … If I rolled the putter halfway decent today, which I did roll it well, just any putts go in the hole, I win this thing by a few shots, it's not even close. It's just how it goes.”

The Greller Factor
Just how much local knowledge caddie Michael Greller was able to give Spieth can’t be measured. But Greller, who’s from nearby Gig Harbor and used to caddie at Chambers Bay, certainly played a significant role in Spieth’s win.

“That was probably the best work Michael has ever done this week to get me through,” Spieth said. “At Augusta, I was on and making everything and striking the ball fantastic. He was the one that got me through this week when I wanted to get down when things weren't going well.”

Greller, however, downplayed his own impact on the outcome. “Ultimately as far as my local knowledge, it really wasn't worth anything, I didn't think, because Jordan's Jordan,” he said. “He's one of the best players in the world, and I was just trying to stay out of his way.”

Don’t Overlook the Other Stories
Such as Oosthuizen making an incredible run with six birdies in his last seven holes to shoot a back-nine 29, tying the lowest nine-hole score in U.S. Open history. No one played better the final three rounds than the South African, who nearly overcame his opening 77 with a 66-66-67 finish.

“Proud of myself the way I came back and kept on playing and knew my game was not far off,” Oosthuizen said. “That 77 was -- I could have easily had a horrible Friday and watched this on television.”

Or Grace, who had never had a top-10 finish at a major, in contention until a wayward drive at 16 went out of bounds. “One bad swing cost me at the end,” said Grace, who is hoping to join the PGA TOUR next season.

Or Jason Day, who’s battle with Benign Positional Vertigo the past three days finally caught up with him. He shot a 74 on Sunday to finish tied for ninth, but he gained a multitude of fans for his courageous effort to stay in contention for his first major.

“I was taken by the fact that so many people supported me,” Day said. “… I fought a good fight. And I think everybody that watched the telecast knows that I never gave up.”