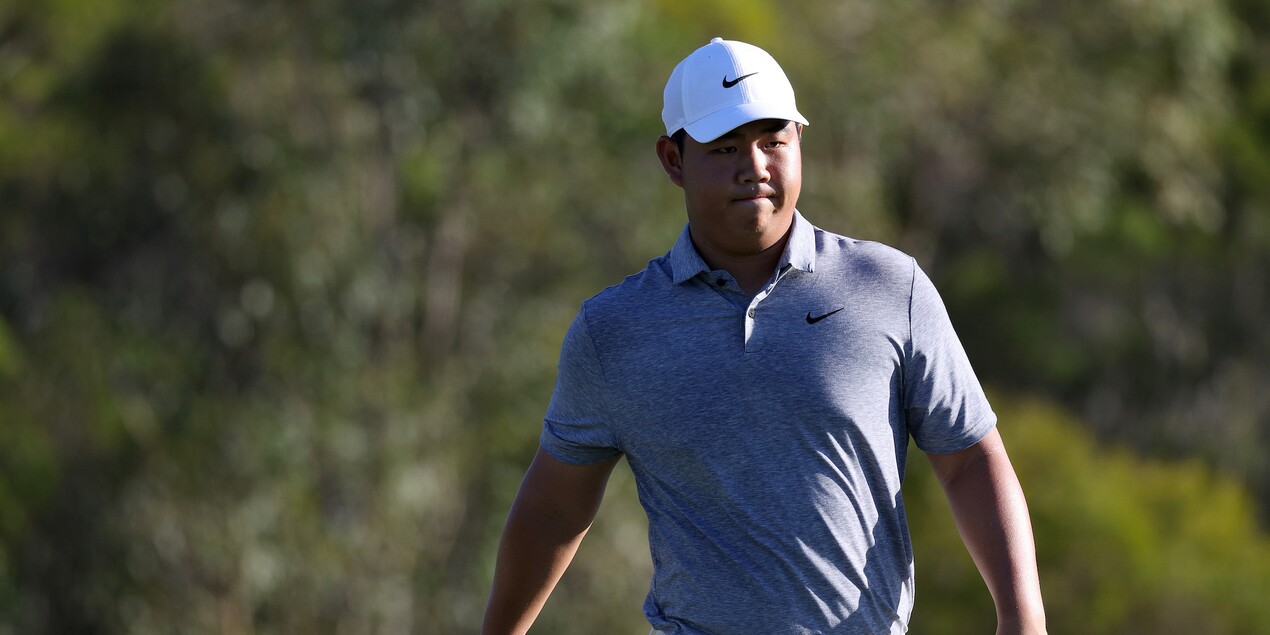 Spieth and Kim have grown close in recent months, as Kim has taken the golf world by storm with two PGA TOUR wins since August and a role as International Team sparkplug at the Presidents Cup.

Kim is still new to the Dallas area, and Spieth shot him a text on Dec. 23 with an invite for a Christmas meal at Spieth’s home. Kim gratefully obliged, and he certainly enjoyed the prime rib-based spread.

“I thought Tom, when he got up first, was going to put the plate away,” Spieth laughed after Thursday’s opening round at the Sentry Tournament of Champions. “And he went and got seconds pretty quickly. And I’m pretty sure he got fourths at one point.

And I eat a lot. And (wife) Annie was like, ‘I think he just put you to shame.’ And I was like, baffled, that he ate more than I did. We cleaned everything dry.”

The meal was first reported by Smylie Kaufman on Golf Channel.

Kim and Spieth played together Thursday at the Plantation Course at Kapalua, in the PGA TOUR’s return to competition after the holiday break. Neither showed much sign of rust, as Kim carded 8-under 65 – one off the lead of Collin Morikawa, J.J. Spaun and Jon Rahm – and Spieth wasn’t far behind with a 6-under 67, shaking off a missed 2-footer at No. 13 with three birdies in his final five holes.

Spieth, 29, is nine years Kim’s elder, but the two share a youthful spirit and have become fast friends. After competing at last month’s Hero World Challenge in the Bahamas, Spieth offered Kim a ride home to Dallas – “I took the Jordan Air,” Kim joked post-round Thursday in Hawaii.

Kim’s parents have also moved to Dallas, but after the trio flew to their native South Korea for a couple weddings this fall, Kim returned to Texas while his parents stayed in South Korea for the holidays.

The arrangement was discussed on the flight back from the Bahamas, and the wheels for Christmas dinner were in motion.

“Annie was like, ‘You’re going to be alone on Christmas,’ and he was like, ‘Yeah but it’s fine. My trainer will be in town. It’s OK. I’ll figure out something to do,’” Spieth said.

In addition to the Christmas feast, the gathering included a domino game called trains – apropos, with Kim’s first name a nod to Thomas the Tank Engine. Kim enjoyed the company of the Spieths’ young son Sammy – “he’s like the Sammy-whisperer,” Spieth quipped. “I think they’re so close in age that it actually makes it nice.”

Knowing Kim doesn’t drink, Annie offered him a non-alcoholic cocktail, but Kim was confused and declined – “I think he thought she was pressing him on a certain type of cocktail,” Spieth laughed.

For Kim, a longtime admirer of Spieth’s skill and approach to the game, it was another lasting memory in a year full of them. And he didn’t depart the Spieth residence on an empty stomach.

“The more time I’ve spent with Jordan, the more we’ve became closer friends,” Kim said. “He was really nice to invite me for Christmas; my family wasn’t home and I was kind of by myself, so I got to spend some time with the Spieths and kind of babysit Sammy, which was really cool.

“It’s been amazing to build a friendship, and it was really cool to play with him today.”