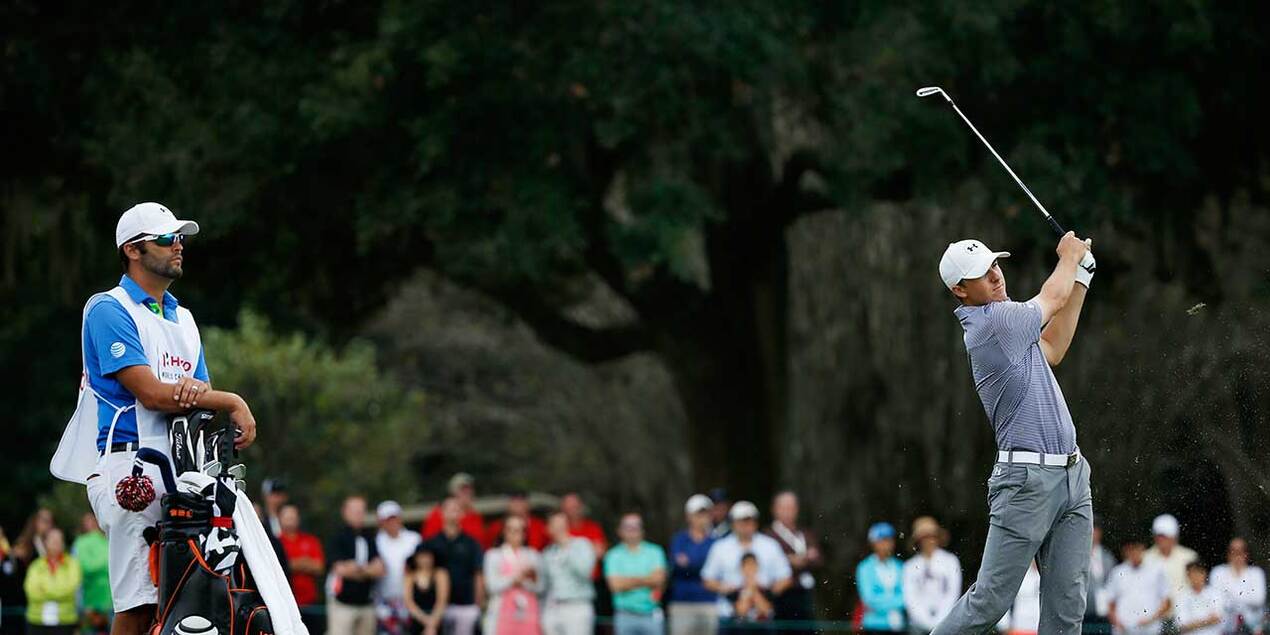 Jordan Spieth won the Hero World Challenge with a performance tournament host Tiger Woods could appreciate. Staked to a seven-shot lead, Spieth blew away an elite field at Isleworth and set two tournament records Sunday when he closed with a 6-under 66 for a 10-shot victory over Henrik Stenson of Sweden.

From three birdies on his opening four holes, punctuated by a hybrid hit perfectly to 12 feet for eagle on the par-5 seventh, Spieth turned the final round into a casual walk along the lakes and palatial homes of Isleworth.

He glanced over at a leaderboard when he made the turn and saw that he was up by 11 shots. And then he made another birdie.

"It was the most fun I ever had playing nine holes of golf," Spieth said.

The 21-year-old from Texas won his second straight tournament in dominant fashion. Spieth won the Australian Open last week by six, and even a trip halfway around the world didn't slow his momentum.

He finished at 26-under 262, breaking the tournament record of 266 set by Woods in 2007 and Davis Love III in 2000, both of those scores at Sherwood Country Club in California. His 10-shot margin of victory broke Woods' record.

Woods, in his first tournament in four months while recovering from back injuries, stubbed two more chips on the 13th hole for a triple bogey and closed with a 72. He tied for last place in the 18-man field with Hunter Mahan, 26 shots out of the lead.

Woods noted that Spieth closed with a 63 in Australia and flew some 9,000 miles to get to Isleworth.

Spieth completes his second full year as a pro by moving into the top 10 in the world ranking at No. 9. The Hero World Challenge is not an official PGA TOUR event, so the $1 million prize does not count toward the money list.

Spieth won by eight shots at Isleworth just three years ago, when he was still in college at the University of Texas.

He had never had such a big lead going into the final round, and there are numerous examples of players who lose ground by trying to protect it.

Spieth came out swinging. He set a target of wanting to lead by 10 shots, and he got there with two of his best shots.

After flinching in the middle of his drive on No. 7 when a camera went off, he hit hybrid toward the left edge of the green, and it fed perfectly off the slope and trickled onto the green. Keegan Bradley two-putted for birdie to get within eight shots, and then Spieth poured in his putt to go up by 10.

Bradley was headed for the eighth tee, when he reversed course and walked over to Spieth to playfully body-slam him. Bradley's caddie, Steve Hale, walked off the green and said, "If we can't beat him, we can at least mess with his bag."

Hale undid the strap on Spieth's bag and moved it to a different location to make it shorter. Spieth's caddie, Michael Greller, was so wrapped up in the round that for the next two hours, he never noticed.

Stenson played with Spieth Saturday, and knew what to expect.

"He was in pretty much full control of every part of his game," Stenson said. "He drove it nicely, hit some good iron shots and his pitching and putting was phenomenal. So it was a one-horse race coming into Sunday. All the rest of us had to do was battle it out for second, really."

Stenson closed with a 69 to take those honors and entrench himself a little deeper at No. 2 in the world behind Rory McIlroy, who did not play this week.

Woods opened with a 77 and was in last place the rest of the tournament. He had not played since Aug. 9 at the PGA Championship, taking nearly four months off to strengthen his back muscles.

"I made some progress," Woods said. "I hadn't played in four months and I'm in absolutely no pain, which is nice. To be able to go all out on some of these drives like I did this week really enforces what I'm doing is the right thing for my body."